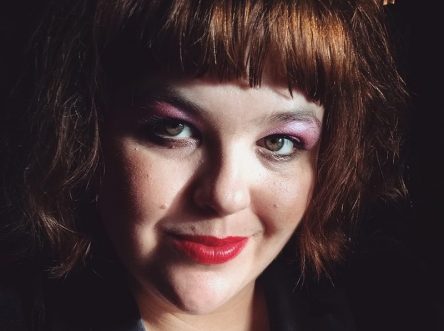 The regular open mic session for all poets will begin at 6:30 p.m. Gonzales will perform at 7 p.m., followed by another round of open mic. Admission is free and open to all ages.

Born in Benton and raised in the small rural community of Lono, Gonzales spent most of her childhood with her head in a book or riding four-wheelers across her family acreage, a news release said. She had an independent innate curiosity that fostered the majority of her learning, reading at least three books at a time since she was 5 years old. At 16, back problems requiring surgery isolated her, but it was reading that provided an escape and grew her naturally into a writer. The written word was her vehicle through adversity.

In 2003, at 17, Gonzales moved to Hot Springs upon getting married, and though the marriage was short-lived, she made a home here with her three children Zeke, Ira, and Veda. She received her Associate Degree in film photography from National Park College. When her children were old enough for school, she enrolled at the University of Arkansas Little Rock to study anthropology. “It was there that her innate curiosity and love of learning propelled her to the top of her class,” the release said.

She was the vice president of the Anthropology Club for two years, named on the UALR chancellor’s list, a McNair Scholar, the co-chair for UALR’s Honors College, and the recipient of the Katherine J. Hardy Award, which is awarded to the senior in the anthropology department with the highest overall GPA. She graduated with honors and received her BA in Anthropology in May 2017.

When asked about being a single mom while carrying a full course load, Gonzales said being a “single mom taught me the importance of a work ethic, a sense of humor, and learning to accept help from people that aren’t obligated to give it, and to not rely on help from people who may be obligated. It’s a lesson in both humility and endurance, honesty and humor.”

Gonzales started keeping a journal at 8 years old and began writing poetry at 14. “When I was 14, I discovered The Poet’s Loft one Friday night during Gallery Walk. I had one of my friends with a car start chauffeuring me to Wednesday Night Poetry readings from then on,” she said.

Since that day, poetry has been a means of growth and healing for her. Gonzales has had three poems published in UALR’s art and literary journal, Equinox, and won the Cooper Equinox Poetry award in 2017. She was also nominated and accepted into the Juniper Summer Writing Institute at the University of Massachusetts-Amherst in 2017.