The Dhamar Archaeological Survey Project in Yemen is directed by Dr. Krista Lewis, Associate Professor of Anthropology, who is also one of the core Middle Eastern Studies faculty members. Dr. Lewis’ archaeological research in Yemen and Oman investigates the relationship between ancient cities, food, trade, and politics.  Her work engages with issues such as developing social complexity, urban agriculture, early globalization, economic botany, resource extraction, craft production, and sustainability from prehistory to the early modern period.

Much of Dr. Lewis’ work in Yemen has focused on the major ancient city of Masna’at Maryah, which was a thriving metropolis during the Himyarite kingdom (1st c. BC-6th c. AD).  Masna’at Maryah is located in the highland mountains of Yemen, on the southwest corner of the Arabian peninsula.  The Himyarite kingdom was the last major pre-Islamic kingdom in southwest Arabia.  At the peak of their power, the Himyarites claimed control of an area larger than modern-day Yemen.

Mapping Masna’at Maryah and its Surroundings

Masna’at Maryah is a one of the largest archaeological sites of the Himyarite kingdom.  This city covers 40.4 hectares (about 100 acres) on top of a high mountain plateau in the western highlands of Yemen.  One of the most famous features of Masna’at Maryah is a prominent 14-line inscription in the ancient south Arabian language and script which was carved into a cliff face next to one of the city’s main gates. The inscription is written in Ancient South Arabic, an ancient indigenous script and language. The inscription tells us that the city’s ancient name was Sam’an and that the people who lived there built roads to link them to neighboring towns and tribes. It also gives us a date for when the inscription was written: 434 of the Himyarite era (4th century AD).

Between 2001 and 2006, Lewis directed a number of field seasons in the Masna’at Maryah area.  She and her team conducted intensive archaeological surveys in an 18 square kilometer area around Masna’at Maryah, documenting a large number of contemporary villages, roads, agricultural terraces, dams, cisterns and other features.  The team also recorded an array of sites of other periods from prehistory to the Islamic.

In May and June 2008, an international team of archaeologists led by Dr. Lewis collaborated to create a precise three-dimensional model of Masna’at Maryah. On the map below, which is a static representation of our three dimensional rotatable surface model, you can discern the shapes of ancient buildings, trace ancient streets, see the locations of the major gates of the city, and understand how the Himyarites collected and stored the water necessary for life in the city. 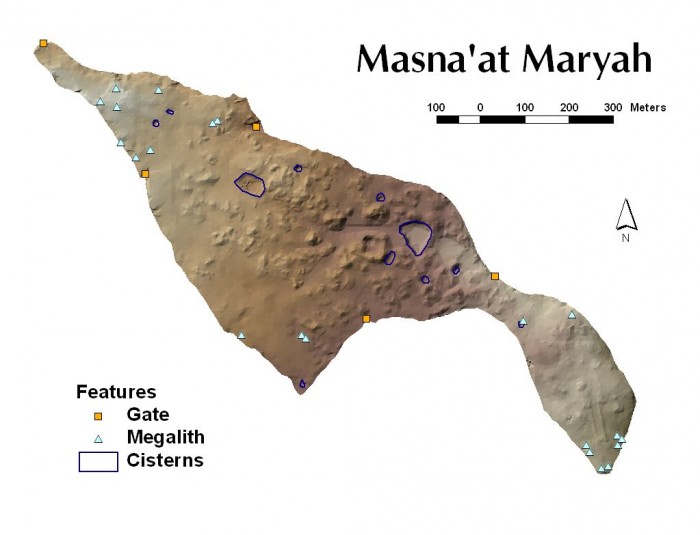 Documentation and mapping of sites such as Masna’at Maryah both provide essential information about life in ancient cities and serve as the keystone for all future research. In addition to making an accurate map of the city in the 2008 field season, we also conducted an intensive surface collection of the site. We recorded the distribution of ancient artifacts across the city in order to better understand how people were living and what daily activities they were conducting when the site was inhabited. The most common artifacts on the site are pottery sherds and fragments of obsidian (black volcanic glass) which were shaped and used as tools. In addition to these, we found fragments of sculpture and building decoration, bone, food grinding implements, worked bronze and iron, abundant iron working waste, and more.

In Summer 2009, Dr. Lewis directed another field season at Masna’at Maryah. This time, the focus was on building stone walls to protect the archaeological deposits from erosion in the heavy summer monsoon rains. We also conducted additional focused sampling of iron slag deposits for laboratory analyses.

UALR student Elizabeth Sanders was a part of our 2008 field team in Yemen: See the you tube link below for an amazing short video of Liz describing her trip and the people and culture of Yemen.

Anthropology student Elizabeth Sanders of the University of Arkansas at Little Rock, along with assistant professor of anthropology Krista Lewis, participated in an archaeological excavation in Yemen in the Middle East. The international project focused on the ancient city of Marya that existed between the first century B.C.

The 2008 field season was featured in a story about global curriculum in UALR magazine.

A huge thanks to the 2008 field team: Ali Sanabani, Director of Archaeology for the Dhamar Province; Assistant Project Director Dr. Lamya Khalidi from the University of Nice, Sophia-Antipolis (CEPAM-CNRS); William Isenberger, Digital Mapping and Graphics; Daniel Mahoney, doctoral student from the University of Chicago; Elizabeth Sanders and Basel Khalil of UALR; AbdulBasset Noaman of General Organization of Antiquities and Museums, Ministry of Culture, Yemen; and Salah al-Komany and Ahmad al-Assar of the Dhamar Museum, Dhamar Yemen.

Thanks to our sponsors! The 2008 field season was funded by the UALR Middle Eastern Studies Program.  The 2009 field project was funded by Yemen’s Social Fund for Development.

Selected publications from Dr. Lewis and her team’s research in Yemen

“Mapping Masna’at Maryah: Using GIS to Reconstruct the Development of a Multi-Period Site in the Highlands of Yemen” by Krista Lewis, Lamya Khalidi, William Isenberger, and Ali Sanabani, Proceedings of the Seminar for Arabian Studies 40 (2010)

“From prehistoric landscapes to urban sprawl: the Masna’at Maryah region of highland Yemen,” by Krista Lewis & Lamya Khalidi, Proceedings of the Seminar for Arabian Studies 38 (2008): 215–230

Krista Lewis, Space and the Spice of Life: Food, Politics, and Landscape in Ancient Yemen, PhD Dissertation, University of Chicago, 2005

Krista Lewis, “The Himyarite site of al-Adhla and its Implications for the Economy and Chronology of Early Historic Highland Yemen,” Proceedings of the Seminar for Arabian Studies, volume 35, pp. 129-141, 2005