Office of Alumni and Development 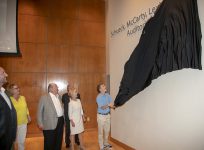 Thomas Schueck, a Little Rock business owner who went to college at night to obtain his engineering degree, built his steel company from the ground up in the late 1960s.

Fifty years later, Schueck’s name became a permanent fixture in the University of Arkansas at Little Rock’s Donaghey College of Engineering and Information Technology (EIT). During a dedication ceremony on Sept. 11, the EIT auditorium officially became the “Schueck, McCarty, Lexicon Inc. Auditorium” in recognition of his family’s contributions to the college.

Schueck, founder and chairman of Lexicon, contributed $1 million to the college in 2008 when asked to help boost the university’s engineering and information technology programs. 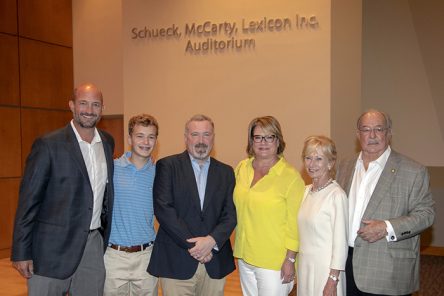 Over the past decade, Schueck’s original gift of $1 million has grown to more than $1.5 million, and funds have been used to assist every student in the college.

“Funds from this gift have supported state-of-the art technology in this college, making it possible for our students to access learning applications 24-7,” said Chancellor Andrew Rogerson. “As you know, leading technology is a must in a college that prepares our future engineers and information scientists and technicians.”

The EIT student lab features whiteboards, dozens of computers, and laptop space and is one of the most advanced labs on campus. More than 1,200 students each year benefit from access to technology applications and computer licensed programs.

“Because of their commitment to the UA Little Rock Donaghey College of Engineering and Information Technology, we can ensure academic excellence for every one of our students,” said Christian O’Neal, vice chancellor for advancement. “It is vital in today’s society that we continue to progress as a university, and we can only do that through the generous philanthropic efforts like that of Tom Schueck.”

The Schuecks, along with their son Patrick, daughter Jennifer McCarty and her husband, Mark, and the McCartys’ son, Harrison, were present when the new signage in the auditorium was unveiled, which Schueck called “a humbling experience.”

“It is a great honor to have our names attached to this auditorium, and we are proud that our family is assisting many students with some support of their financial needs,” he said.

Gov. Asa Hutchinson could not attend the event but offered remarks in a pre-recorded video shown at the event. The governor congratulated the Schuecks for the success of their business which started in 1968 in a garage and now employs more than 1,300 employees.

“The company has played a major role in construction projects across the state and nation,” he said.

Schueck, a Saint Louis native, worked for a local construction company after high school. He took night classes and graduated with a civil engineering degree from Washington University in 1965.

Top Right: Thomas Schueck, center left, is joined by his family as his grandson, Harrison McCarty, unveils a new sign during a dedication ceremony renaming the auditorium in the EIT building to the Schueck, McCarthy, Lexicon Inc. Auditorium.

Above Middle: Thomas Schueck and his family were honored Sept. 11, 2018, during a dedication and naming of the College of Engineering and Information Technology auditorium as the “Schueck, McCarty, Lexicon Inc. Auditorium.” From left Patrick Schueck, Harrison McCarty, Mark McCarty, Jennifer McCarty, and Marge and Tom Schueck.