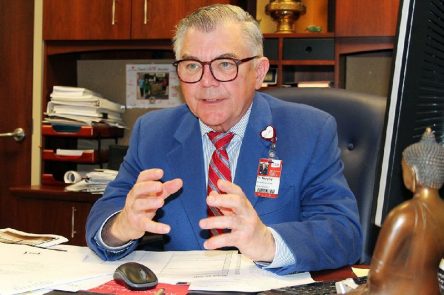 Dr. Bruce Murphy, chief executive officer of the Arkansas Heart Hospital, wasn’t exactly looking for attention when he made a donation last year to the University of Arkansas at Little Rock’s College of Education and Health Professions.

All he wanted to do was quietly provide a little help to the school and get back to his busy schedule.

But no. Now he’s gotten himself named as the honoree of the 16th Annual Taste of Little Rock, the April 4 event that brings together some of central Arkansas’ finest restaurants to raise money for the UA Little Rock Alumni Association Scholarship Fund.

“They’re rascals about this,” Murphy says in his office at the heart hospital, an institution he founded with seven other doctors 22 years ago. “I wanted to give them money anonymously to help in a specific area in their health-care college. They convinced me to not be anonymous in the gift.”

The goal, Murphy says, is to help students who are working or raising children stay in school.

And he keeps up with the program’s progress.

“I get an annual report, and it’s a very rewarding read,” he says.

Ryan Miller is director of the alumni association.

“Dr. Murphy has drastically changed health care in central Arkansas,” he says. “He’s been a UALR supporter for many years, but he’s done so anonymously. He’s always thinking outside the box to help students.”

Hiring a social worker to help students stay on track is just one example of Murphy’s forward thinking, Miller says.

“Whether they are struggling with balancing work and school or if they have a family, the social worker is there to help them. That’s a gift that changes students’ lives.”

Murphy’s concern for students also goes well with the purpose behind Taste of Little Rock, which raises scholarship money.

“Most of our scholarships are in the $5,000 range,” Miller says. “They are … scholarships that have the potential to change the students’ lives and change their families because we have a lot of first-generation college students.”

No need to be UALR alumni or students to attend Taste of Little Rock, Miller adds, just come out and enjoy the food.

And there will be lots of food, with about 40 restaurants participating.

This is Mauri Douglas’ fifth year as co-chairman of the Taste of Little Rock.

Douglas, UALR Class of ’74 and ’86, has interviewed students who have applied for alumni scholarships.

“So many of the students are working, paying their living expenses. These scholarships are so important to the students.”

Many UALR graduates continue to live in central Arkansas, she says.

“When we give scholarships to those students, we’re benefiting the entire central Arkansas area. That’s real important for the economy in this area.”

Stephanie Caruthers is co-chairman of the the event. She’s also a managing partner at Trio’s Restaurant, which just happens to be one of the restaurants serving at the fundraiser.

As with Douglas, Caruthers has been part of the interviewing process for potential scholarship recipients.

“Hearing their stories, everyone is so deserving,” she says. “You want to give a scholarship to every single one of them.”

Taste of Little Rock is also a fun time for the restaurants involved.

“The great thing about the restaurant community in Little Rock is that we are all friends,” she says. “It’s kind of like a party for us. It’s the best time. We take breaks from our tables and try samples from the other restaurants.”

The evening’s honoree will be making his first Taste of Little Rock appearance.

“I’ve heard about it for years,” Murphy says. “Scheduling conflicts haven’t allowed me to go.”

He’s also coming around to being in the spotlight.

“I’m just a tad on the embarrassed side,” he says. “I’ve been very fortunate and blessed in my life, and received a lot more than I ever expected. I agreed to do this to help the school, and I’m delighted to do it.”