UA Little Rock began making significant changes to the on-campus network in 2018. The first phase involved setting up 1 Gbps internet access for all wireless devices. The second phase of the upgrade will give wired connections the same improved speeds.

The wireless upgrade was completed with the installation of faster, more powerful switches in every building.

The number of services that require internet access continues to grow, so IT Services is continuously analyzing access and improving connectivity for all services and websites. Before this project, Roku, Apple TV, Fire TV Stick, Xbox, and Playstation would have significant issues connecting or staying connected to the wireless network. Now, these services (and many others) are readily accessible and confirmed to be working as expected for students and faculty alike.

Not only has the access speed, availability, and functionality increased, but the coverage area was also greatly increased, where possible. Wireless coverage in the Jack Stephens Center and the Sports Complex have been or are being upgraded, as well.

The university is continuing to make changes to its network in 2019. IT Services is moving all wired connections to the new, faster switches. Switch speeds will be as much as 10 times what they were before, going from 100 Mbps to 1 Gbps. 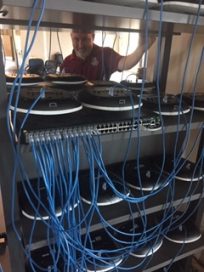 These wired moves are, in part, preparation for the move to Voice over Internet Protocol (VoIP), in which new digital phones will connect over the network instead of the old telephone system. This is a major project involving over 50 buildings and several hundred network equipment closets. IT Services is about halfway through the wiring moves, and we are systematically re-wiring the network closets to upgrade and consolidate cable management.