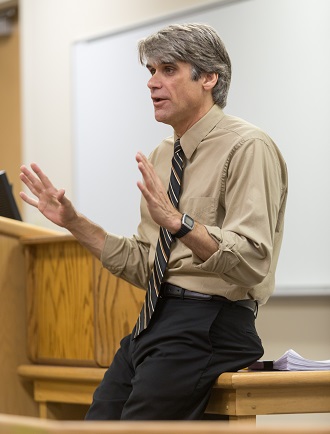 George Mader teaches Constitutional History, Legislation, Research Writing & Analysis, and Conflicts of Law.  His scholarship centers on constitutional and statutory interpretation, focusing on questions that bring the wording and structure of text together with history.  He is particularly interested in separation of powers issues, the theory and limits constitutional amendment, and legislative entrenchment.  His teaching is dedicated to helping students develop creative and convincing legal arguments through clarity of both thought and communication, and then combining that clarity of expression with engaging style and rhetorical punch.

Professor Mader grew up on a dairy farm in Minnesota and still insists on referring to that state as “God’s country.” He is a runner, sometime baseball player and lifetime baseball fan.