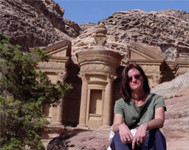 Dr. Krista Lewis is a Professor of Anthropology who specializes in the archaeology of ancient and pre-modern southern Arabia and its relationships to the wider Middle Eastern and Indian Ocean regions.

Dr. Lewis conducts archaeological and ethnoarchaeological research on the way people use food, landscape and the environment as tools for political and social negotiations in daily life, including how agriculture and foodways are related to ancient urbanism and international trade networks.

She has been conducting fieldwork in the Middle East since 1993 and has lived, worked, and traveled widely across the region.  Dr. Lewis also speaks fluent Arabic.  She received her PhD from the Department of Anthropology at the University of Chicago in 2005.

Dr. Lewis directs two major archaeological projects in southern Arabia, one in Yemen and one in Oman.  In Oman, she directs excavations at the UNESCO World Heritage Site of Al Baleed.