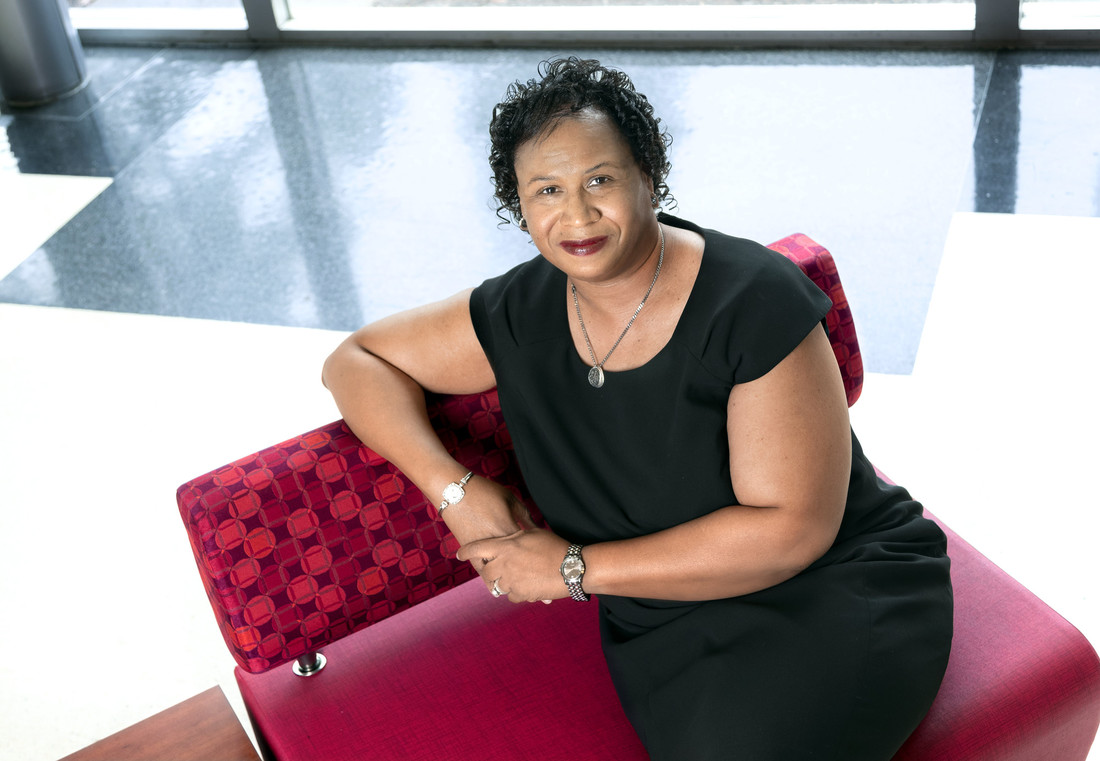 In this special series for Women’s History Month, UA Little Rock is profiling women leaders who are making a difference at the university. Regina Wade-Carter has the university’s safety as her top priority. She serves as UA Little Rock’s associate vice chancellor of public safety and chief of police.

Q. Tell me about yourself.

You won’t find too many people in my position that have as diverse a background as me. I started out in housing at Henderson State University. I was 19 and working as an assistant hall director for an all-female dorm. When I came to UA Little Rock, Jim Hendley was the chief here and hired me to be a relief dispatcher as I was finishing my undergraduate degree. I’ve also worked in Admissions and Financial Aid, and I’ve served as the interim registrar twice at this university. I’ve also served as adjunct faculty on this campus teaching sociology classes.

While I was in the registrar’s office, I was maintaining my auxiliary police officer certification. The million dollar question is how I became chief. Dr. Joel Anderson and Dr. Bob Adams asked me to be interim chief, and I did that for almost a year. At the same time, my son was in junior high, and I felt that I wasn’t ready to be a full-time chief. I went back to work in the registrar’s office. A year and a half later, I got the call again to come back and be interim chief. I was offered the job on a full-time basis in 2014, and I’ve been here ever since.

I’ve got one son, Joseph Carter Jr., who will graduate this May from the University of Arkansas and then he will be attending graduate school. I’m so proud of him. This young man has been maintaining an almost 4.0 GPA the whole time.

People like to say I’m the first African American female police chief on campus, but I don’t like to look at it that way. God put me in the position where I needed to be, and he put certain people along the way to steer me in the right direction.

Q. How did you arrive at UA Little Rock?

I transferred here my senior year in college. I was a senior at Henderson State, and I got married. My husband was working in the Secretary of State’s office. I decided the commute was too much, and I decided to come to UA Little Rock.

I have an undergraduate degree from here in political science. I also have a master’s degree in public administration. I owe everything to Dr. David Sink and Dr. Jerry Stevenson. They were both excellent professors in the MPA program.

Q. What does UA Little Rock mean to you?

Q. What is your current position at UA Little Rock? What are your duties?

As UA Little Rock’s chief of police, I oversee the daily operations of the university police department. We have a staff of 43 personnel, including officers, communications, and dispatchers. I have briefings every morning with my command staff, have briefings with my communications department to see what type of calls came in, overseeing the budget, overseeing our criminal investigations division, and overseeing parking operations for the campus. Basically I oversee all planning, organizing, directing, and evaluating the activities of the department, including providing a safe and secure environment for all students, faculty, staff, and visitors.

Q. How would you describe your leadership style?

I see myself as the players’ coach. I’ve always prided myself in knowing every operation in the department because I’ve done it before. I won’t ask my staff to do anything I haven’t done before. I’m very entrenched in the day-to-day operations of the department. My officers and dispatchers know they can rely on me, so I try to lead by example.

Q. As a female leader, what has been the most significant barrier in your career?

I won’t say I’ve had barriers in my career, although I had to set a certain bar for myself and maintain that bar. I’ve had some good people in my life that have steered me in the right direction. Dr. Joel Anderson, Dr. Bob Adams, and Ms. Sandra Dannaway gave me an opportunity, and I’m grateful for that. I’ve had supervisors that have backed me 100 percent. This university has been good for me. I see myself as opening the door for someone else to follow in my footsteps in the future.

My ultimate goal is to one day be a vice chancellor for student affairs. I have one young lady in the department who I’m very proud of. She asked me to be her mentor, and that opened up my heart so big. She’s said she wants to be where I’m at. I told her don’t aspire to be where I’m at; I want you to be farther than where I’m at.

One thing I didn’t realize is how many people are watching and how many lives I have touched on campus. People still remember me from Financial Aid and Records and Registration. I love watching those kids cross the stage on graduation. It just wraps everything together.

Q. What woman has inspired you the most and why?

I can say my mom has inspired me the most. One thing she’s always told me since I was a little girl; You never let anyone define you. That has been my concept in life. She has instilled in me that education is the key. No one can take your education away from you no matter what. My mom is the oldest of six children. She turned down the opportunity to go to college to help her mom and stepfather rear up the rest of the kids. I take admiration from that. Under her leadership, every last one of her brothers and sisters attended college and graduated except for one. I just can’t say enough about my mom. She’s my rock.

Q. What advice would you give to the next generation of female leaders?

Never give up on your dream. Whatever you set your mind to do, do it. You will have obstacles along the way, but you’ve got to work through those obstacles.

I could have derailed my dreams by a comment that was made to me when I was 6, and a teacher, during a parent-teacher conference, told my mom that I could not be taught. The principal was there and told my mom that we are going to get Regina where she needs to be. I went to another teacher in another class, and I flourished.

That is when my mom made that comment to me; You never let anyone define who you are. That is what I would tell any woman who is trying to go through the ranks in leadership. Don’t let anyone define who you are. You are in control of your own destiny. Look where I am now. The sky’s the limit on what you can do. I don’t believe in a glass ceiling either. I’m going to kick that glass ceiling out.

Q. Name something about yourself that most people would be surprised to learn.

Believe it or not, but in some ways I’m kind of an introvert, and some people would not believe that. Sometimes, I have to step back and have some alone time and quiet time to focus and to determine what my game plan will be. On the outside, I’m a people person, but I’m also an introvert.

Q. What’s one leadership lesson you’ve learned in your career?

You can’t do everything by yourself. I learned that years ago, but I learned it the hard way. It’s a team effort. I believe in surrounding myself with people that have the knowledge and skillset that can help promote the department. It takes a village to help run any department correctly.