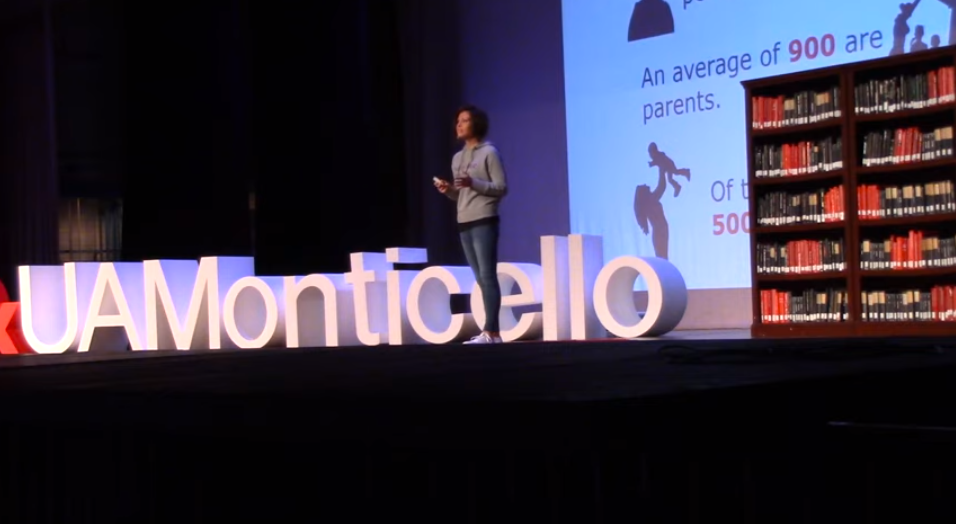 Clement, who has a 3-year-old son, said she’s seen how vitally important it is for single parents who are going to college to have reliable childcare.

“After Ehren was born, his dad decided he no longer wanted to be a family,” Clement said. “We went through a difficult custody battle. Being a resilient person, I kept fighting. Once everything had settled between his dad and I, I decided to continue my education.”

In 2019, Clement enrolled at UA Little Rock in the interdisciplinary studies program, where she is studying sociology, psychology, and criminal justice online.

“It was incredible after I learned I could take the program online, because I take care of my mother and I have my son,” Clement said. “I’ve never felt more at home at any institution than I have at UA Little Rock. Everyone I talk to who is thinking about going back to college, I tell them to go to UA Little Rock.”

After being invited to participate in the event, Clement knew immediately what topic she wanted to cover.

“When I was asked what topic would be most useful for parents going back to college, I didn’t even have to think – on-campus childcare,” she said. “If you look at dropout rates and think about how many parents that could be going to college, but they can’t because they don’t know what’s going to happen with their kids when they go to school.”

In the United States, an average of 900 students per college campus are parents and an average of 500 of those students are single parents, according to the Institute for Women’s Policy Research.

“While that may seem like a small number, the truth is that so many more of us would go to college if we had support,” Clement said. “In fact, over the last decade, almost three times as many parent students dropped out when compared to non-parent students. Imagine how many of us never enroll in the first place.”

While many studies look at the impact of childcare offered on college campuses, Clement believes a TEDx-style talk makes a greater impact.

“We can look at statistics all day long, but it’s more meaningful when there is an actual story and face to back it up,” Clement said. “In about 30 states, the cost of childcare is more expensive than the cost of tuition. For me and my son, the federal poverty guideline is about $17,650 per year for a family of two. I make about $800 a month. How many single student parents are like me and struggle to afford childcare?”

In the course of her research, Clement learned that 8 out of 10 single parents in college live off about $1,600 a month. Additionally, they take out more student loans than traditional parents, which are often used to pay for living expenses and childcare, and have higher dropout rates.

“Life is stressful enough with having to worry about paying for childcare in general with keeping your grades up and going to work and wondering if you’re spending enough time with your children,” Clement said. “If campuses offered on-campus childcare, it would reduce some of that stress and anxiety. It increases the retention and graduation rates of single parents who are students. Children who attend these child care centers are more likely to attend college in the future.”

After she graduates in December, Clement plans to enroll in the Master of Social Work program at UA Little Rock and later become a psychotherapist.