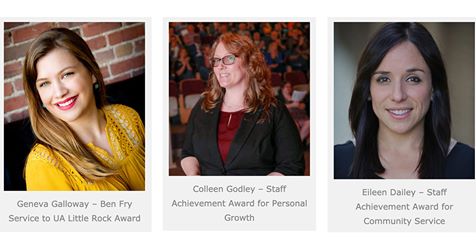 The University of Arkansas at Little Rock Staff Senate honored three of its staff members for excellence in the areas of service to the university, community service, and personal growth.

Geneva Galloway’s co-workers believe that she has a skill for anticipating and engaging the needs of those around her. Some examples of her insights for the Donaghey Scholars Program include streamlining the admissions process, improving how minutes are kept for the Policy Council meetings, and providing wonderful support for the students.

“She is an advocate for students in every way, whether that is providing a sympathetic ear, helping with classes, financial aid issues, or planning a study abroad trip,” One Donaghey Scholar student said about Galloway. “If you are needing someone to vent to or just a hug, she is there.”

Galloway works very hard to make a positive difference in the lives of students. She organizes a social event or workshop for Donaghey Scholars every week and oversaw a committee of students to hold a talent show that was also a fundraiser for the Trojan Food Pantry. After bringing in representatives from UA Little Rock Children International to talk about their work with local children, she organized a drive to gather children’s books to donate.

“Geneva’s influence extends beyond the Donaghey Scholars Program,” said Dr. Simon Hawkins, director of the Donaghey Scholars Program. “She played a crucial role in supporting the International Studies Club with its food drive for World Hunger Day. She has been an active participant in the campus food garden. More significantly, she was the assistant director for the theatre department production of ‘As You Like It.’ Geneva is dedicated to the university and will do whatever she can to support it.”

Eileen Devereux Dailey has a passion for helping others, both through her work as a business consultant for the Arkansas Small Business and Technology Development Center and through her extensive volunteer work with nonprofit organizations in central Arkansas.

“Eileen moved to Arkansas from Mexico in 2013 and immediately began to plug in and serve the community,” said Heather Robinette, ASBTDC entrepreneurial services manager. “Since making Little Rock her home, Eileen has dedicated her time to a number of local organizations and causes. She is a kind and compassionate person who looks for ways to serve others and give back to the community.

Dailey volunteers for Our House, which provides support and care for homeless individuals and families. She serves on the logistics committee for Our House’s annual fundraiser, Dinner on the Grounds.

With a passion for the wellbeing of animals, Dailey also volunteers for Saturday Pet Showings and fundraisers for the Central Arkansas Rescue Effort for Animals (CARE). Her work care led her work with the Humane Society as a registered animal rescue volunteer, where she has participated in four large-scale animal rescue operations.

Dailey also serves as a board member for Party with a Heart, which helps local small nonprofits raise funds and awareness by organizing events. She has helped with fundraising for local organizations like Arkansas PAWs in Prison Education, Hope Rises, Literacy Action of Central Arkansas, and Partners Against Trafficking Humans.

“Eileen is also dedicated to meeting the needs of the Hispanic community in central Arkansas and beyond,” Robinette said. “During her time in Little Rock, she has developed a close working relationship with the Mexican Consulate. Through this relationship, she participates in various events, including speaking at the Consulate’s financial education sessions. Eileen volunteers for a local non-profit organization called El Zocalo, which assists immigrants with various issues by providing resources and information.”

Colleen Godley’s former co-workers at the William H. Bowen School of Law recognize her as a staff member who used every opportunity available to create a better future for herself and her family.

After joining UA Little Rock in 2011 as an administrative assistant for the Higher Education Institute at Bowen Law School, Godley began working toward a Bachelor of Business Administration degree in business information systems and a certificate in data analytics. Godley gained a promotion to career service program coordinator in 2016 and completed her undergraduate degree in 2018.

“And as if steadily assuming more responsibility at the law school while raising a family provided insufficient challenge, she also spent the last decade completing her education,” said Nancy Bellhouse May, research professor at Bowen. “Using a steady course-by-course approach, she propelled herself through UA Little Rock’s undergraduate program, gained admission to the graduate school, and prepared herself for a new career.”

Godley’s hard work and determination led her to another promotion as an ERP business analyst and developer in Information Technology Services that she began in February. She is also set to graduate with a Master of Science degree in business information systems in May.

“I know that aiming non-traditional students toward success is part of UA Little Rock’s core mission,” May said. “And I would not be surprised to learn that every department has a success story of its own, but I have heard of no other staff member who so quickly recognized the opportunity that UA Little Rock offered, mapped a step-by-step path to success, and eventually created a resume that made her a top candidate and eventual hire for an important professional job on main campus.”

Outside of work, Godley is also an active volunteer at Our Savior Lutheran Church in Cabot, where she serves as a Sunday School teacher and as the advertising and social media manager.