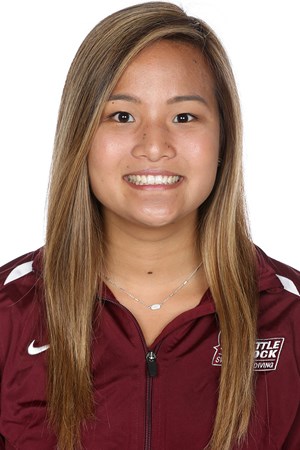 Little Rock senior swimmer Charis Won has been named the winner of the 2020 Kevin A. Crass Heart of a Trojan Award. The award, initiated in 2017, is given annually to a Little Rock senior student-athlete based on community service, leadership, and dedication to their team.

“I’m very pleased to be able to honor Charis as this year’s Kevin A. Crass Heart of a Trojan Award winner for her contributions to our university and our athletic department,” said Director of Athletics George Lee. “Charis has been an active member of the community, excelled in the classroom, and been a strong competitor for our swimming program for the last four years, and truly embodies what this award is all about.”

A four-year letter winner for the Trojan swim team, Won had her most productive season in 2019-20, setting three-lifetime bests in the 50, 100, and 200-yard freestyles at the 2020 Missouri Valley Conference Championships. She also notched a season-best time in the 100-yard backstroke, reaching the finals of the Kansas Classic.

Won captured both the Richard Turner Academic Award and the All For One, One For All Award, given at the Little Rock Swimming and Diving banquet following the 2019-20 season.

“Charis is the type of person you wish you had a team full of,” said head coach Amy Burgess. “She was one of the hardest workers we had both in and out of the pool. She was one of the first to volunteer, being involved with many different groups on and off-campus, or just be there for a teammate or friend. Charis always shared her kindness and dedication with all those she interacted with, and I’m proud of her continued growth and commitment to our program.”

Out of the pool, Won continued to excel in the classroom as she was a four-time selection to the MVC Scholar-Athlete team. She was named to the Chancellor’s List four times and was named a UA Little Rock Science Scholar, graduating this past May with her bachelor’s degree in biological sciences with a minor in both chemistry and psychology and health sciences with a 3.89 GPA.

The Katy, Texas, native was an active member of the Little Rock community as well, assisting in numerous service and charitable endeavors during her time. Won has been involved with organizations including the Arkansas Food Bank, Salvation Army, Special Olympics, Goodwill, Susan G. Komen Race for the Cure, and the Arkansas Community Health Clinic, in addition to a number of other service organizations.

The award’s namesake, Kevin Crass, is an avid supporter of the Little Rock Athletic program, as well as an ambassador, community leader, and benefactor in the Little Rock community for over 30 years. Crass has assisted the Trojan Athletic Department in numerous ways, including currently serving as a board member for the Trojan Advisory Council. He and his wife, Cathy, were the honorees for the 10th annual SpectacUALR in 2018, and the two continue to be staunch advocates for Little Rock Athletics throughout the state.

Won becomes the second swimmer to be named a Kevin A. Crass Heart of a Trojan Award winner, joining former teammate Ann Kharlamova, who captured the award in 2019. Baseball’s Cory Malcom was the inaugural winner of the award in 2017, followed by soccer’s Fali Garuba in 2018.