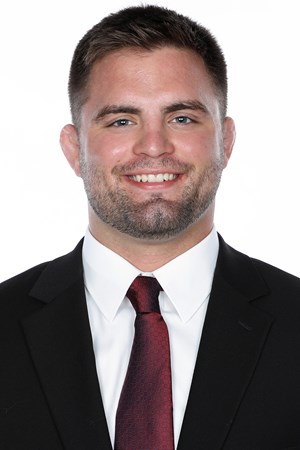 “Chandler brings an exciting new dynamic to our staff and program,” said Erisman. “His character, background, and wrestling knowledge have instantly elevated us. We are already seeing dividends of having him here on staff and we are grateful for him and his wife, Tori, for believing in our mission and joining us here in Little Rock.”

Rogers joins the Trojans as an assistant coach after spending a year as director of operations for Air Force wrestling, where his duties included logistics, management, and social media support. Concurrently, Rogers spent his time in Colorado Springs pursuing his wrestling career as a 2020 Olympic Trials qualifier and fourth on the ladder in the nation.

His post-collegiate wrestling career is fairly new yet highly impressive. In April 2019, Rogers represented the United States men’s freestyle team at the 2019 Pan American Championships in Buenos Aires, Argentina. Rogers was instrumental in the USA’s momentous showing as the squad swept all 10 gold medals in freestyle for the first time in history. Since then, Rogers took third at the U.S. Open in Senior Greco and later recorded a second-place finish at the U23 Greco World Team Trials.

Rogers graduated from Oklahoma State in 2019 with a degree in general education after a successful four years with the decorated Cowboy wrestling program. He was a four-year starter for Oklahoma State, a three-time NCAA qualifier, two-time All-American, and Big 12 champion at 165 pounds. During his five years with the Cowboys, he compiled a record of 110-30, claiming top honors at several tournaments.

“I’m excited to join the Little Rock staff, and I’m really grateful that Neil could give me the opportunity to start my coaching career at the Division I level,” said Rogers. “I feel like I’m going to be in good hands with experienced coaches like Coach Neil and Coach Javi. I’m looking forward to working with all the guys and seeing what we can do this year.”

Rogers will assist in all aspects of the Little Rock wrestling program as the Trojans head into their second season this year.