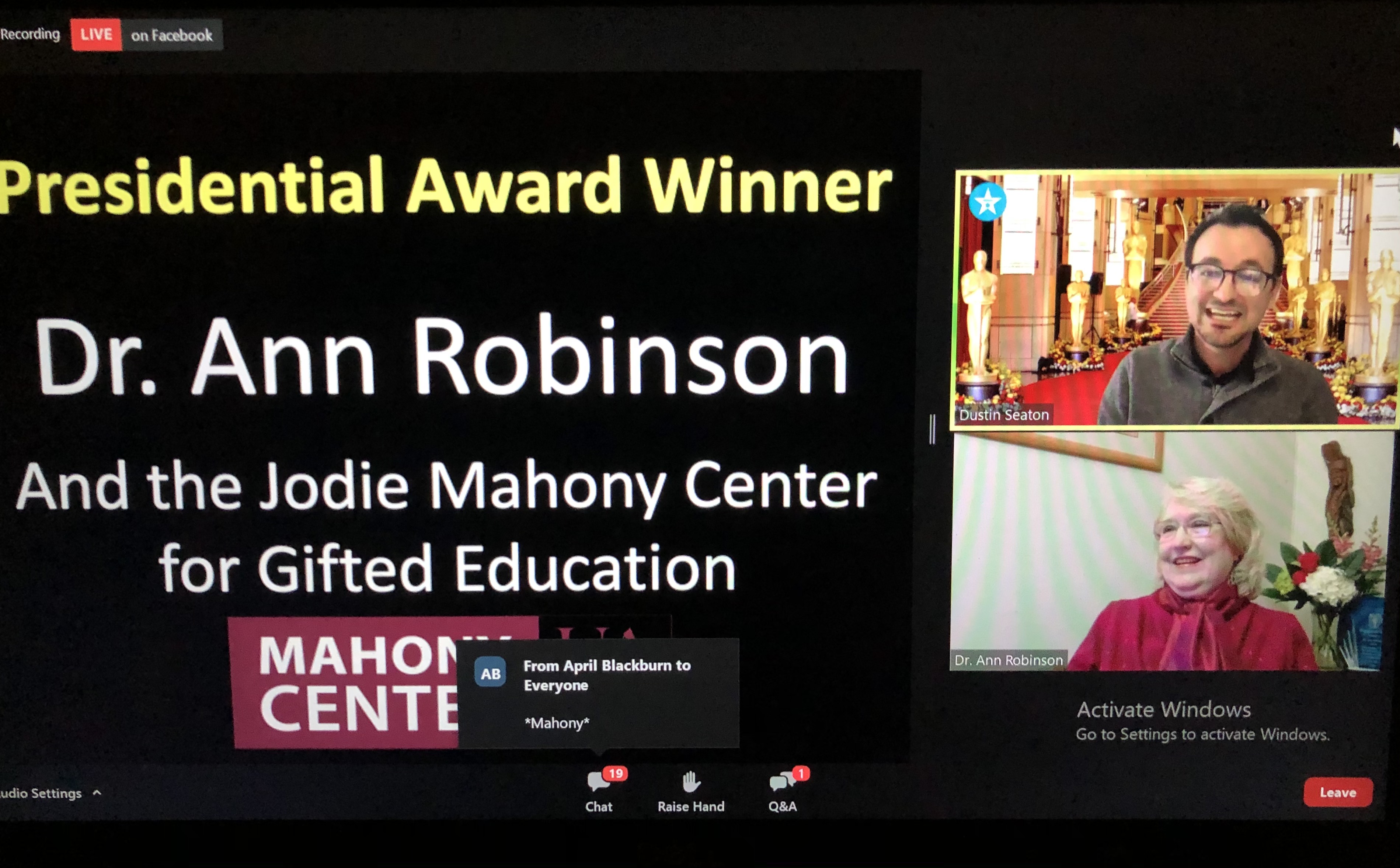 The Jodie Mahony Center for Gifted Education at the University of Arkansas at Little Rock and the center’s director, Dr. Ann Robinson, have received the 2021 Presidential Award from the Arkansans for Gifted and Talented Education (AGATE).

“The Mahony Center is thrilled to receive the 2021 Presidential Award from Arkansans for Gifted and Talented Education,” Robinson said. “This award is possible because the center has been supported by a fantastic and creative staff, by UA Little Rock administrators who care about us and about our mission, and through the interest and support of the Mahony family. We are deeply appreciative to everyone and truly enjoyed the ceremony which brought together well-wishers from across the state and the country.”

The AGATE Presidential Award recognizes a person, organization, or institution that has been a powerful influence in gifted education across the state.

The Mahony Center is one of only 25 gifted centers nationwide, and it is recognized nationally for its research, grants, professional development, STEM education initiatives, and leadership.

“As a point of personal pride, Dr. Ann Robinson first introduced me to gifted education when I enrolled in her Saturday statistics course at UA Little Rock in the spring of 2007,” Seaton said. “It was there I first learned about the importance of identification and program services for gifted students as well as met many other impressive gifted educators, such as Krystal Nail who is now program director of the Office for Gifted and Talented and Advanced Placement at ADE-DESE.”

Both Robinson and Dr. Christine Deitz, associate director of the Jodie Mahony Center, have served as former presidents of AGATE and continue to play important roles in the National Association for Gifted Children.

“Dr. Christine Deitz has also helped me transition into the AGATE presidency following in her footsteps this past July and personally helped me obtain my National Board certification in 2011,” Seaton said. “They both deserve all of the recognition bestowed upon the Presidential Award because of their tireless efforts both in public and behind the scenes.”

This year also marks the 20th anniversary of the Jodie Mahony Center’s founding. Robinson and the center are in good company when it comes to award winners. State Rep. Jodie Mahony, for whom the center is named, received the very first AGATE Presidential Award in 2004.

“Mr. Mahony was a highly effective state legislator for 36 years,” Robinson said. “As early as the 1970s, he was elbow deep in developing legislation that enjoined schools to cultivate and develop the talents of young people. He was a visionary.”