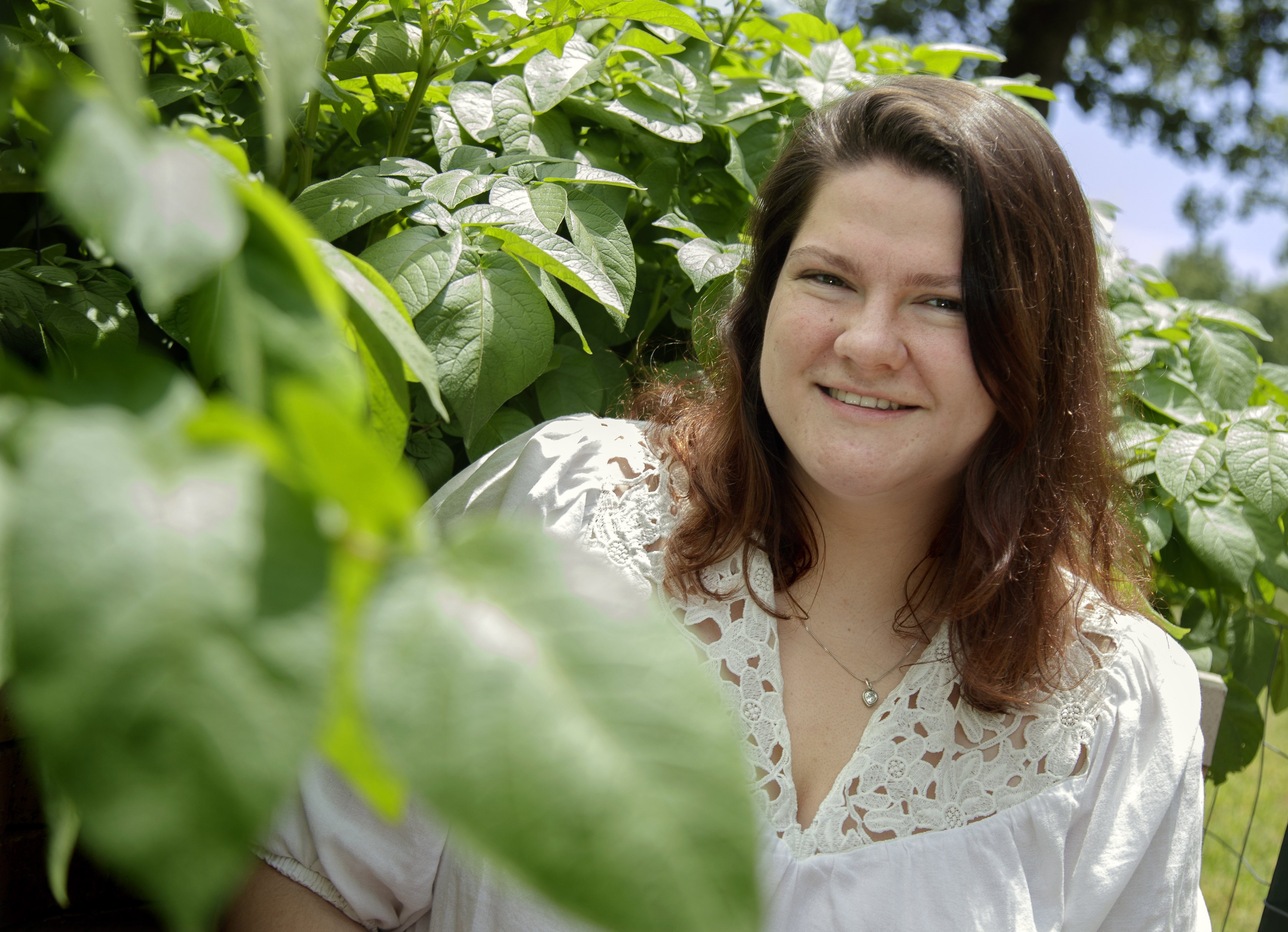 On Dr. Simon Hawkins’ desk in the Donaghey Scholars Honors Program office, there hangs an unusual item – the picture of a one-year old bull that lives in Manitoba, Canada.

The picture as well as the bull that shares his name is a source of pride for Hawkins. A student, Avery McLean, asked her parents to name one of the calves from the family’s farm after her mentor.

“Hawkins was one of our family’s 2020 calves,” said McLean, a Donaghey Scholar from Pilot Mound, Canada. “Every year we name the calves off a certain letter of the alphabet. It was H in 2020, so I asked my parents if we could name the bull after Dr. Hawkins. That bull lives on a commercial ranch in Manitoba, and Dr. Hawkins loves to show off a picture of his bull.”

McLean is graduating this month from UA Little Rock with a bachelor’s degree in biology, a minor in political science, and plans to make the world a better place through environmental law.

McLean grew up on her family’s cattle farm in rural Canada. Her hometown of Pilot Mound has about 500 residents and lies five miles north of the North Dakota border. She knew that she would have to leave home to receive the education she craved. At 15, McLean enrolled at the Institut Collegial Vincent Massey Collegiate in Winnipeg, Canada. From there, she was recruited as a swimmer to UA Little Rock.

“I think everything happens for a reason. I worked with a swimming recruiter in high school, and the assistant coach at the time reached out to me and thought I would be a great fit for the program at UA Little Rock,” McLean said. “When I was on campus, they told me about the Donaghey Scholars Program. I was on the honor track in high school, and it would be a great opportunity.”

Since her family has friends in the cattle business in Arkansas, McLean’s parents were more comfortable with her attending college 20 hours away from home.

“It’s also been of help to my family because I have been able to attend Simmental breeders conferences,” she said. “Simmentals are beef and dairy cows that have origins in Switzerland, Austria and Germany. We talk about what is going on genetically. I think genetics is a very cool thing, especially in bovine creatures. My parents are in pursuit to breed the perfect polled (no horns) Simmental. My mom is a vet, so she has all of these charts that show what pairings will lead to these characteristics throughout the generations.”

As a student-athlete on the swimming and diving team, McLean served as one of the UA Little Rock representatives on the Sun Belt Student-Athlete Advisory Committee. She also shares her passion for swimming with the children in her hometown during summertime.

“At home, I have served as the head coach of the summer swim team,” she said. “It’s a small community. There are 500 people max. Any time I would come home, I would have 20 kids join my summer program. It’s crazy to have that many kids in the area want to spend an hour a day swimming. I loved sharing that with these kids.”

After graduation, McLean is headed to Penn State University to study environmental law with a generous scholarship that covers 90 percent of her tuition and fees.

“The plan is to study environmental law, which will enhance my biology degree,” McLean said. “There is the potential to do a master’s degree in agricultural policy or a Ph.D. in addition to the law degree. I will decide if I want to pursue one of those degrees after my first year of law school.”

Among her many pursuits, McLean has also served as a team leader and committee chair for Girls of Promise for three years.

“Girls of Promise is a great initiative,” McLean said. “I signed up as a team leader and I fell in love with the conference. All of the girls I led are getting ready to graduate from high school. Those girls become your children during the conference. After the conference, I was asked to join the committee. I was the youngest team leader, and now I push for all Little Rock students to be team leaders. I like to see people who are not much older than those students come in there and give them advice on what classes to take and the people who can help you.”

As her parents’ only child, McLean knows that she will eventually move back home to help run the family farm. While visiting Texas, McLean met a Texas A&M educated world-renowned Simmental advocate who manages a cattle farm owned by a successful lawyer. She found that fortuitous visit as proof that she can have the life and career she’s always dreamed of.

“I realized I could still have a career and run the family farm,” she said. “I can have someone on the ground so I can still pursue my dreams in policy making, politics, and law. The agricultural community is very important to me. Who am I to say to make these changes when I’ve left my community and abandoned it?”

McLean became interested in politics during middle school. During the Canadian national election, McLean recalls that one of her teachers became upset. She was certain that taxes would be raised because the newly elected politicians didn’t understand the agricultural industry.

“My teacher asked me if I was going to run for prime minister,” McLean said. “I started to think about how I can get a chance to be a part of the national conversation. I figured that lawyers, accountants, and doctors are the ones that people typically vote for. I don’t want to be a general lawyer because the environment is the next step that the world needs to concentrate on, and agriculture is a big part of the environment. People are so often uneducated about the issues we want to make policies on. I want to be in the conversations when these policies are made.”