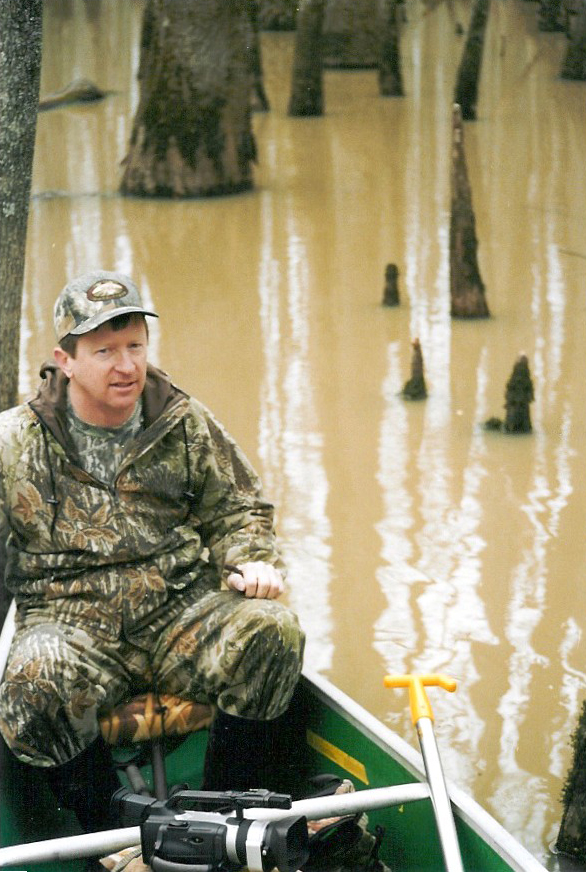 In 2004, a kayaker named Gene Sparling spotted a rare Ivory-billed Woodpecker, a bird thought to be extinct, and the encounter sparked a firestorm of scientific and public interest.

David Luneau, an associate professor of electronics in the Department of Engineering Technology at the University of Arkansas at Little Rock, is one of the researchers who took part in the somewhat secret investigation that brought a defunct species metaphorically back to life in 2005.

Now the rare bird that was only rediscovered some 16 years ago is one of 23 species the federal government has marked to declare for extinction on Dec. 29. The issue is open for public comment, and Luneau, who doesn’t think the bird is extinct, plans to make a public comment.

“I don’t know why Fish and Wildlife changed their mind in such a relatively short time,” he said. “It was only 2005 when people were writing papers about how they had got it wrong about the Ivory-billed Woodpecker being extinct. It’s not official yet, so we’ll see what happens after the public comment period. I think the Ivory-billed Woodpecker is still out there. I don’t think there has been any kind of large population of this bird for the last 100 years. For us to have seen the last one in 2004 and 2005 seems very unlikely.”

Luneau has been in search of the Ivory-billed Woodpecker long before the famous Arkansas sighting of 2004.

“There was a sighting of the Ivory-billed Woodpecker in Louisiana in 1999, and the news broke in 2000,” Luneau said. “I was always interested in that bird because it was extremely rare. My brother and I went to Louisiana several times. In 2002, I was one of six people on a formal search in that area with ZEISS, a high-end optical company. In 2003, I did some search in the White Water Refuge in Arkansas.”

Luneau’s previous research led to his involvement in the Arkansas research team who spotted the bird multiple times in 2004 and 2005.

“Gene Sparling saw the bird on Feb. 11, 2004,” Luneau said. “He wrote an obscure reference about the bird on the Arkansas Canoe Club website. A fellow canoe club member saw that post and knew what he was talking about and talked him into contacting Cornell University. Two searchers came down two weeks later, and they saw the bird too. They came back to me because I’d been looking for the Ivory-billed Woodpecker for a few years at that point. On March 1, 2004, we started to search unofficially under the radar. We kept it very quiet because the last thing you want is a horde of people in a place where there is an endangered species, but it’s hard to hide 20 researchers in the Big Woods in Arkansas. In April 2005, we made the announcement. The story broke just before we got a paper in the journal ‘Science’ detailing the rediscovery of the species.”

Luneau monitored remote cameras to help with the search for one of the rarest birds in North America.

“What I did back in 2004 to 2008 was put out game cameras,” he said. “We would find trees with large cavities where the Ivory-billed Woodpecker might nest. I aimed game cameras at the cavities, and we did time-lapse pictures trying to catch the bird coming and going. I ran cameras out in the swamps for five years. I currently make and sell cavity cameras for researchers monitoring the Red-cockaded Woodpecker, another endangered species.”

Luneau managed to capture a short video of the elusive bird in 2004 with a camera he borrowed from UA Little Rock while out on Bayou De View, approximately five miles from Brinkley, with his brother-in-law. Though blurry, still images of the video found their way into the 2005 “Science” article, “Ivory-billed Woodpecker Persists in Continental North America,” that depicted the research team’s search for evidence on the Ivory-billed Woodpecker. Luneau’s wife, Terri Roberts Luneau, even wrote a children’s book, “Big Woods Bird,” about the event in 2005.

“As soon as I first heard about the Ivory-billed Woodpecker, the first thing I asked was did they get a picture of it,” Luneau said. “Early on in my search, I figured that no one wanted to hear that I saw the bird. They wanted hard evidence. I took a video camera out with me and left it running all the time. It was a nice digital video camera that I borrowed from UALR, and it had a one-hour digital tape. I caught the video by virtue of having the camera running. My footage in 2004 was the only photo evidence we had at the time we wrote the paper for ‘Science.’ Of the 17 sightings we had, all were naked eye or binocular sightings – no additional hard evidence. But, even with hard evidence, you still can’t convince some people.”

Since 2005, scientific searches for the Ivory-billed Woodpecker have continued in Arkansas, Louisiana, and Florida, but no evidence of a recoverable population has been found. While Luneau doesn’t actively hunt for the bird any longer, he always keeps his eyes and ears open for a sighting of the elusive bird.

“My research has tapered off over time. I don’t have easy access to a canoe nowadays, and I have devoted my time to other projects,” Luneau said. “I go out occasionally, and I keep in touch with other researchers. In the heyday, I was getting up at 4 a.m. to be there at sunrise and going out three or four times a week to look for the Ivory-billed Woodpecker. It was a pretty intense and tiring time. I always have my eyes and ears open. When I drive through Eastern Arkansas, I am always open to the extremely rare possibility that one might fly over the interstate.”

In the upper right photo, David Luneau searches for the Ivory-billed Woodpecker in the Big Woods of Arkansas in 2004 as a part of a research team that published a 2005 article in “Science” that talked about the sightings of the rare bird in Arkansas.