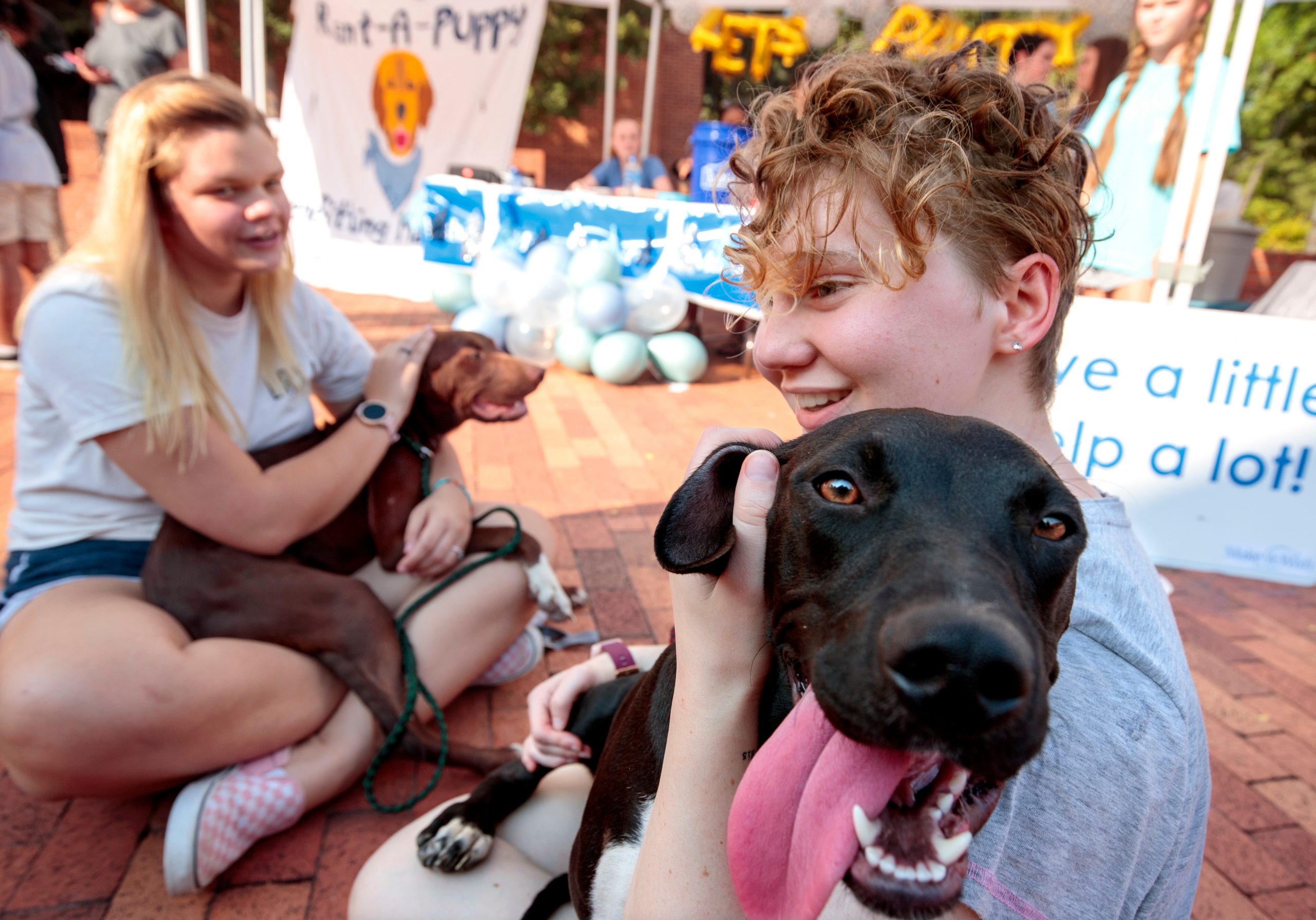 In the Chi Omega Courtyard outside Ottenheimer Library, the UA Little Rock community had the chance to play and interact with rescue and shelter dogs from Southern Hearts Rescue on Sept. 30.

The Gamma Zeta chapter of Chi Omega was founded in 1895 and chartered on UA Little Rock’s campus in 1964. The Make-A-Wish Foundation, a national nonprofit organization who help children with critical diseases fulfill their hearts’ desires, is their philanthropy. The sorority raised $965 dollars for the cause.

“Right now we have enough money to grant one wish, and we hope to possibly grant two wishes with this fundraiser,” said Lexi Brooks, community service director for Chi Omega.

Southern Hearts Animal Rescue is a local nonprofit in Bauxite that saves abandoned and starving animals living on the streets. They have between 60-70 dogs at their facility and brought four who are up for adoption to the event.

“We do this because it’s our passion to do this,” said Whitney Morrison, founder of Southern Hearts Animal Rescue. “As a nonprofit organization as well, I love Make-A-Wish, they are amazing.”

The Rent-A-Puppy dogs included Josie, a 2-year-old American Staffordshire Terrier. She is described as a young female dog who is friendly, playful, and loves other dogs. Hera is a female German Shepherd. She is five 5 months old and is affectionate, playful, and loves people.

They also brought two hound puppies, Colt and Dolly, who are German Shorthaired Pointers around seven months old. Colt, the male, is smart, loves kisses, and children. Dolly, the female, is funny, friendly, and loves children too.

“Both of us miss our dogs at home, so we decided it was a great opportunity to play with some of them,” said Colin Weatherly, sophomore mechanical engineering major and Tyler Hosey, sophomore architectural engineering major. “This event is a great way to meet dogs that are up for adoption right now and it raises money for Make-A-Wish so win-win.”

For anyone interested, all four dogs have been fully vetted, fully vaccinated, and the adoption fees are low. Even more animals to adopt from them can be found via this link.

For more information, contact Lexi Brooks at ajbrooks1@ualr.edu or 870-340-5584 to help Chi Omega. Contact Whitney Morrison at 501- 602-8037 or search their social media if you are interested in adopting an animal from Southern Hearts Rescue.