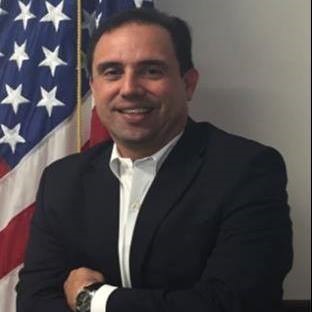 Robert Alvarez, of Upper Marlboro, Maryland, has just completed his goal of finishing his bachelor’s degree 25 years after he first attended the University of Arkansas at Little Rock.

Alvarez will graduate Dec. 18 as the first graduate of UA Little Rock’s new online degree program in political science with emphasis in international studies, as well as a minor in economics.

A member of a military family, Alvarez was born in New York City where he spent part of his early childhood, and also spent later parts of it in Dorado, Puerto Rico, and Winter Park, Florida. He joined the U.S. Air Force in 1993 and was stationed at Little Rock Air Force Base until 1998.

“The person who recruited me into the Arkansas Air National Guard when I was coming out of my active duty tour told me to go to UALR,” Alvarez said. “I went to see the campus, it was really nice, and it was just a matter of time before I stayed there.”

Alvarez has fond memories of his undergraduate years at UA Little Rock from 1996 to 1998, of watching Derek Fisher play basketball for the Trojans and taking a study abroad trip to Guadalajara, Mexico, to study international management with Dr. Deborah Baldwin and Dr. David Blevins.

“We visited the U.S. Consulate and met with the commercial service officer for the state department,” he said. “When I went to work with the Department of Commerce, I already had an idea of what they did because of the experience we had abroad. This was right after NAFTA was signed, so it was a good mix of academic and field experience.”

By 1998, Alvarez thought he had completed all the requirements for his bachelor’s degree except for two classes he intended to finish online. He even walked in the May commencement ceremony.

“When I reapplied for graduation sometime later, that was when I found I didn’t meet all the requirements and the economics degree was no longer offered,” Alvarez said. “Years go by, and life is taking place. You move along, you have a family, pursue business interests, and I got deployed a couple of times. But during all that time, I was able to attend law school part-time on a provisional student status for over two years, and was also able to complete a Graduate Certificate in Global Security Studies from the Joint Forces College, a college of the National Defense University.”

After leaving Arkansas, Alvarez went on to have successful careers in the military as a reservist, a federal employee, and in the private sector. His positions included branch chief for the Department of the Air Force, Air Force subject matter expert financial analyst for Joint Staff-National Guard Bureau, senior budget analyst for the Department of Commerce’s International Trade Administration, and as a managing partner in a consulting firm.

“I’ve been in the private sector as a contractor since 2016,” Alvarez said. “I needed a degree conferred so I could continue pursuing graduate studies. When I found out about the new online political science program, I went for it. Dr. Margaret Scranton reviewed my profile and told me I could finish the bachelor’s degree requirements. It was a blessing.”

Now that he’s completed his undergraduate education, Alvarez is planning to join the Master of Public Administration program at Syracuse University in 2022.

“I may even go for my Ph.D. or complete legal studies eventually,” Alvarez said. “Here’s one thing folks need to understand. Today, even with all the challenges we are facing, online education is making a difference. Regardless of the successes you may have had in the past, whether in government or business, education is very important. When the printing press was invented, people all over the world could read the Bible because of this new medium. I think the internet has launched the second wave in online education and learning. This medium can be used for so many great things as we’ve witnessed in recent years. Education is out there. You can do anything you want. It’s just a matter of doing it.”

Alvarez said he might even return to spend his golden years in Arkansas.

“I haven’t been there in the past 20 years, but I do own property in Hot Springs Village,” he said. “I’m pretty sure it will be one of my retirement spots in the future. Arkansas is one of those places that has a very special meaning for me.”