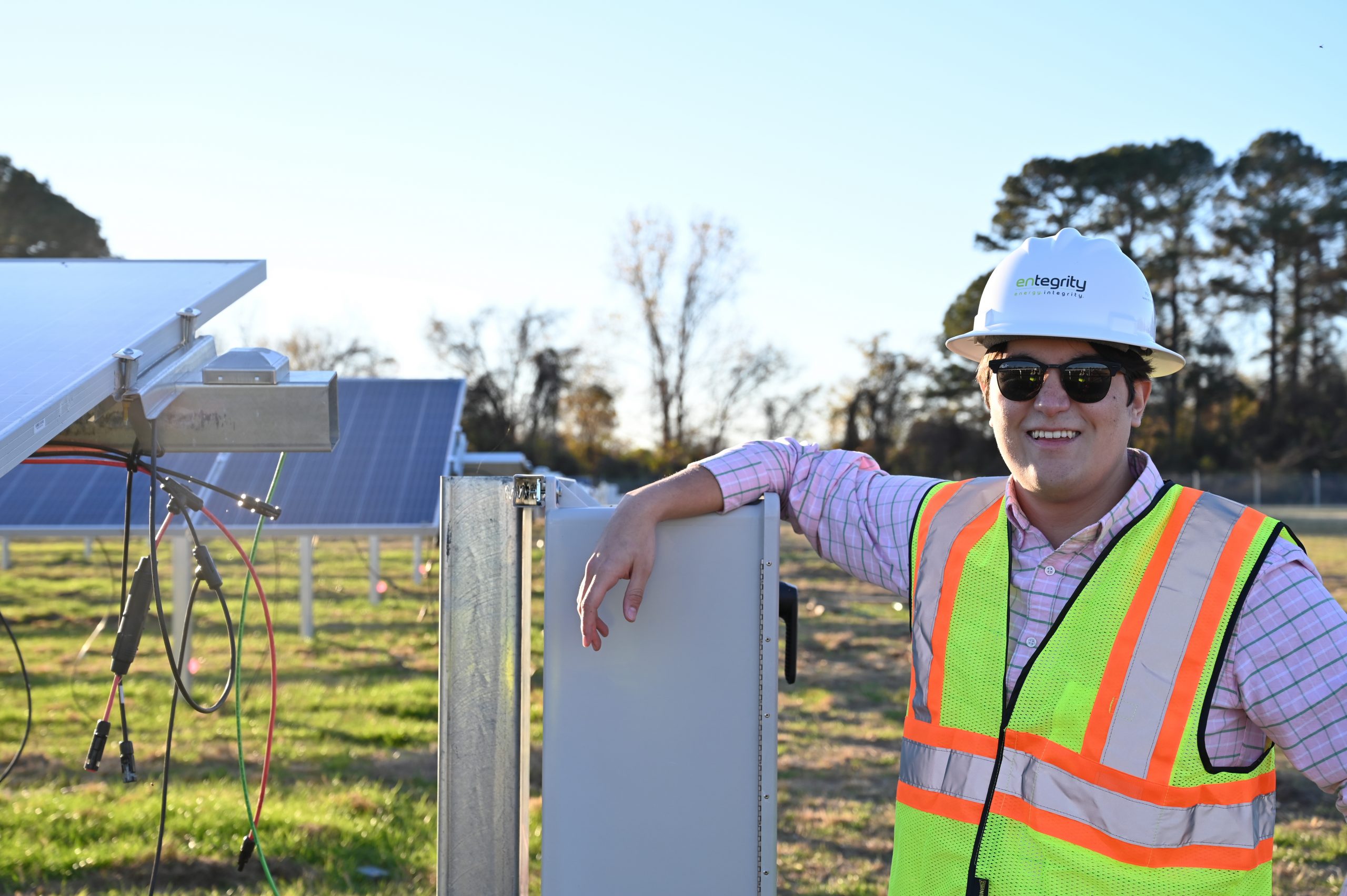 Joseph Sepulveda, of Cabot, Arkansas, is fulfilling his dream of making the world a better place by designing solar arrays at an up and coming Little Rock startup company.

Sepulveda will graduate Dec. 18 with a bachelor’s degree in mechanical engineering from UA Little Rock. Since May, Sepulveda has worked as a solar coordinator at Entegrity Energy Partners, where he is responsible for designing, constructing, and selling solar arrays.

“I’ve always been passionate about the environment,” he said. “I had the opportunity to work at a green energy startup, and I realized I could work in solar. I wanted to learn how they design solar arrays and what are the layers of engineering that go into that. That passion has driven me to work in this field. I have a unique opportunity here to learn design for a company that is learning solar in real time. It’s been a great journey.”

Sepulveda’s love of engineering came from his father, who would spend his days wiring homes and repairing radios, televisions, and other electronic devices.

“Growing up, my dad was intrigued with electronics and electricity,” Sepulveda said. “I fully believe my dad is an electrical engineer without the degree. The military guided that knowledge and introduced it into airplanes. One of my dad’s friends from the Air Force had retired and started a small company in Memphis. He needed someone to be the floor manager, and the owner of the company said my dad was a perfect fit.”

His parents and older brother and sister moved from Chile to Memphis, Tennessee, in the 1990s. The family later moved to Cabot after his father got a job at Falcon Jet in Little Rock.

“I’ve followed along with my father by being an engineer, but I didn’t follow along the path of electricity, because electricity is still magic to me,” Sepulveda said.

In 2017, Sepulveda graduated as valedictorian from Cabot High School and joined UA Little Rock as a member of the Donaghey Scholars Honors Program.

Sepulveda started off his career at Entegrity as an inside sales intern. He found out about the green energy startup company from another Donaghey Scholar who was interning there. After interning for seven months, Sepulveda was promoted to a sales and operations coordinator. During this time, he closed more than $20 million worth of energy service performance contracts and solar sales.

In 2019, Sepulveda studied abroad to work as a lab assistant involving sustainability projects at Universidad del Desarrollo in Santiago, Chile. One of Sepulveda’s assignments was to design a housing unit for an air quality monitoring device. Sepulveda and his colleagues traveled to Coyhaique on the southern tip of Chile.

This small tourist town is also known as the most air polluted town in all of South America. Sepulveda’s team visited the town to measure air quality levels and to help the people of Coyhaique understand how bad the air is polluted due to a heavy amount of wood burning.

“Since it’s in the very south of Chile, it’s very cold there, even in the summer and especially at night,” Sepulveda said. “That coldness transforms into more wood burning. If you imagine a town of 25,000 people just burning wood throughout the day, there is an immense amount of smoke. Over the past 5-10 years, Chile has seen an unusual amount of respiratory issues coming from this town. It was troubling to realize some of the areas with the highest amounts of pollution are elementary schools. It’s a very complicated issue. You can’t just tell the residents to stop heating their homes by burning wood, or they will freeze to death.”

The study abroad trip was also a homecoming for Sepulveda, who used the opportunity to learn more about his Chilean roots.

“That was the most impactful moment of my college career,” he said. “I was raised in a Chilean household. Since I was born in the U.S., I’m very Americanized. I didn’t know the struggles that my parents went through in their country of origin. It was a very profound and impactful identity experience, and I wouldn’t have that experience without UA Little Rock and the Donaghey Scholars.”