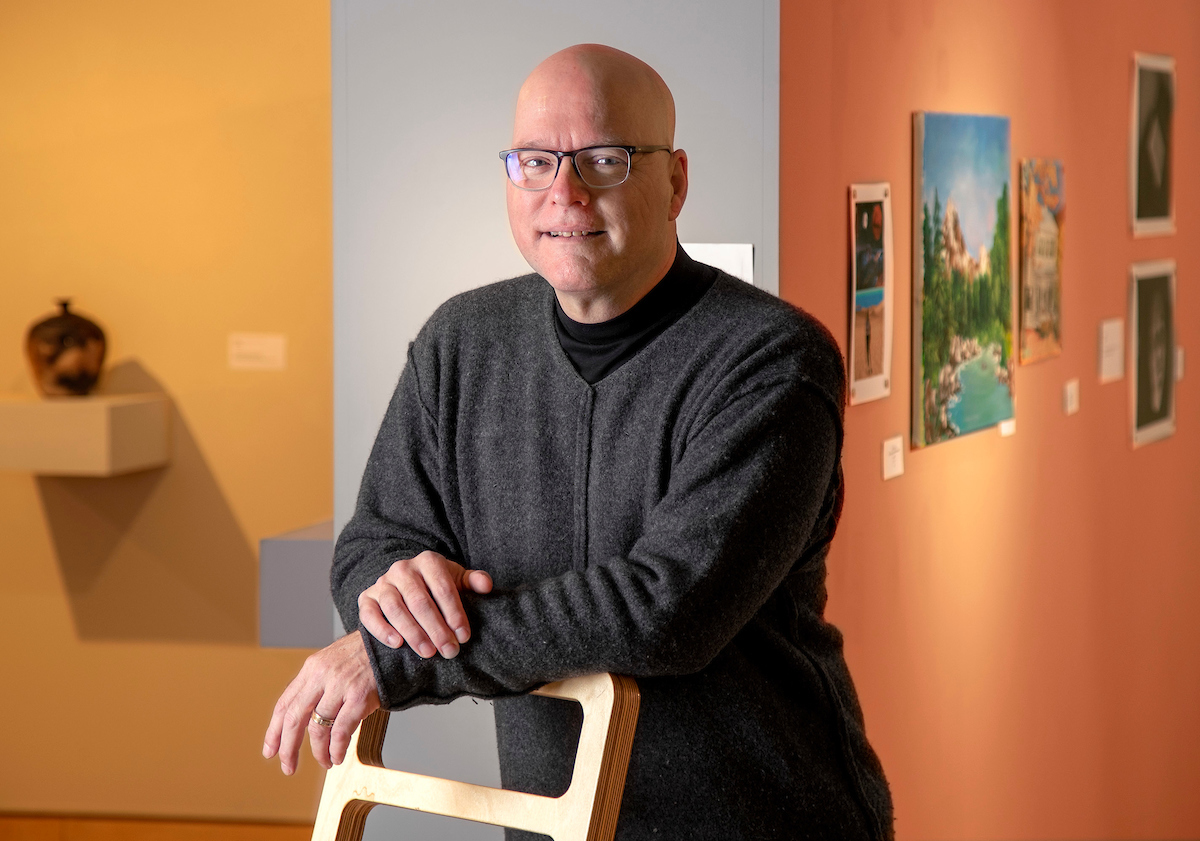 Brad Cushman, art gallery director and curator of exhibits at the University of Arkansas at Little Rock, has retired after spending more than two decades bringing art and culture to Arkansas.

While Cushman came to work as the gallery director in 2000, this wasn’t the first time he has called UA Little Rock his home. In his first job after graduating from college, he worked as an adjunct instructor in the Department of Art in 1986 and 1987, teaching art appreciation and drawing 1 classes.

“UA Little Rock was my first teaching gig,” Cushman said. “I got my professional start at the university, and then I moved on and I came back to finish my career of 34 plus years of working in education. That’s the sum of my professional career.”

A native of Springfield, Illinois, Cushman earned a bachelor’s degree in studio art and minor in business administration from Illinois College in Jacksonville, Illinois, and a Master of Fine Arts in painting from the Cranbrook Academy of Art in Bloomfield Hills, Michigan.

Cushman also worked as an adjunct instructor at the University of Central Arkansas and a high school art teacher in Illinois before joining Southeastern Oklahoma State University. He would work at the university for 12 years and would depart as the chair of the Department of Art.

“It was a small town, and I was looking for something new in 2000,” Cushman said. “I got a call from Gary Cawood, who taught photography at UA Little Rock at the time, who told me they needed a gallery director. I thought that it would be a cool thing to throw my hat in the ring.”

“My passion as a gallery director was to put together exhibits that celebrated diversity and inclusion,” Cushman said. “I felt that it was important in gallery programming to represent the voices that were underrepresented – Black artists, Hispanic artists, minority artists, LGBTQ artists, and women artists. It was a good forum for those discussions across disciplines.”

Cushman marks his greatest accomplishment at UA Little Rock as the preservation and conservation of the Joe Jones mural, “The Struggle of the South,” that is now on display at UA Little Rock Downtown. The mural wrapped around the walls of the dining commons at Commonwealth College in Mena, Arkansas, where students met to discuss social and political issues. The mural imagery depicts sharecropping, coal mining, and lynching.

UA Little Rock purchased the 44-by-8-foot mural in 29 pieces in 1984, after it was found in an old house in Mena. They sat in storage until 2009, when Cushman received a phone call from a curator at the Saint Louis Art Museum who wanted to display the mural in an upcoming exhibit on Joe Jones.

“At that point, I’d been at the university for nine years, and I’d never seen the mural because it was so fragile,” Cushman said. “The people from St. Louis came and looked and offered to conserve a portion of the mural for the exhibit. I spoke to Chancellor Joel Anderson, and I said we have an opportunity for a major museum in the country to preserve the mural.”

Conservation work began in 2010, and a part of the mural was displayed in the “Joe Jones: Painter of the American Scene” exhibit from October 2010 through January 2011 at the Saint Louis Art Museum. Following renewed interest in Jones’ work, UA Little Rock received three grants to complete restorative work on the mural. The Arkansas Natural and Cultural Resources Council awarded the university $536,000 to be used for the conservation of the mural.

“Helen Houp and her team in Dallas had the mural for four years and brought it back to life,” Cushman said. “It became a passion project for me. It was like an antique roadshow on steroids where you find the masterpiece under the bed. This was a very large piece that should never have survived, but it did. It falls back to my interest in diversity and cross-disciplinary discussions, and I think it will be a great resource for the university in years to come.”

Outside of his work at UA Little Rock, Cushman has been actively involved in promoting the arts in Arkansas by serving on the boards of the Arkansas Arts Center and the Thea Foundation. He is also a member of the Artspace Advisory Board for Little Rock/North Little Rock and the Public Art Advisory Board of the Bill and Hillary Clinton National Airport.

In retirement, Cushman plans to spend his time enjoying life by making art, traveling, and engaging in other creative projects. He will start this new chapter of his life with a trip to Venice and Barcelona later this spring.

“I’m a maker by nature, and I have a studio art background,” Cushman said. “I do like to write creatively. I love to travel. I love to travel to see art. I’ve curated exhibits for over 30 years. There might be exhibit projects down the line, but I am going to take a break and reflect over the next month and a half and reset. I have a feeling that making art, creative projects, and some travel, if my health and physical being and the world allow it, will be a part of it. Some days, I will do nothing. I don’t have a definite plan yet, but I won’t just sit around and twiddle my thumbs.”

As Cushman reflects on his long career in the art world, his advice to art students who want to be successful is to show up in the studio and make art.

“That sounds simple, but it’s that commitment to go into the studio and work regularly that makes a difference,” Cushman said. “The more you do, the better you get. The next thing you know, it’s 20 years later. You just have to show up, believe in your own hand, and have confidence in what you are doing. And go to see other artists. Go to galleries, go to exhibits, and travel to get inspired by what other artists are making.”