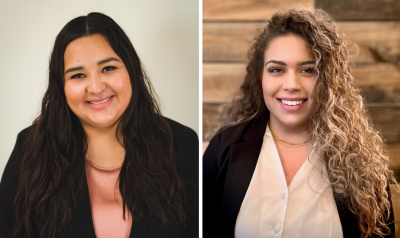 Virginia Vanegas and Keeli Wallace, two students at the UA Little Rock William H. Bowen School of Law, have been elected to positions on the National Latino Law Student Association (NLLSA) Executive Board.

Vanegas, a rising third-year student at Bowen, has been elected to serve as the NLLSA Director of Community Service. Her responsibilities include organizing the community service event at the NLLSA annual conference. Vanegas will serve as a liaison with the host school to research and plan a community service/pro-bono opportunity for conference attendees.

Vanegas is a first-generation college graduate from Sedalia, Missouri, who completed her undergraduate degree at Rockhurst University in 2018 with majors in communication studies, Spanish, and psychology. Prior to law school, she was employed as a paralegal—assisting victims of domestic violence in filing protection orders and working on various other family law matters.

In addition to the NLLSA position, Vanegas serves as the president of Bowen’s Latin American Law Students Association, and a member of Bowen’s National Trial Competition Team, the Arkansas Association of Women Lawyers student chapter, and the Phi Alpha Delta Robinson Chapter. She is also on the Hispanic National Bar Association Region XII’s planning committee, helping organize their first Summit this fall. Lastly, she is on the Board of Directors for El Zocalo, Central Arkansas’s largest immigrant resource center. Her legal interests include immigration, employment, family, and criminal law.

Wallace, a rising second-year student at Bowen, has been elected to serve as NLLSA South Atlantic Regional Director. In this position, she will be communicating, advocating, and requesting resources for LALSA chapters from law schools in Alabama, Arkansas, Florida, Georgia, Louisiana, Mississippi, North Carolina, South Carolina, Tennessee, and the Commonwealth of Puerto Rico.

Wallace is a first-generation college graduate from San Antonio, Texas. She completed her undergraduate studies at Regis University in Denver in 2020, earning an undergraduate degree in neuroscience. Wallace minored in Spanish and peace and justice, discovering that she was drawn more toward her minor studies rather than her major courses. Her legal interests include social justice advocacy and criminal justice reform.