Lafayette DeRamus, a junior physics major at UALR, has written an abstract that has been accepted for presentation during the 2014 Emerging Researchers National (ERN) Conference in STEM. 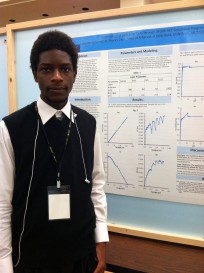 The conference will be held in Washington, D.C. in February and comes with a travel award, which will cover all the associated costs of attendance.

“This is an example of the great success of our undergraduate research,” said faculty advisor Jingbiao Cui, an associate professor in UALR’s Department of Physics.

“Lafayette participated in this research for about six months. He is a very curious student and always eager to learn and to explore. I believe he will be a successful researcher in the future, if he chooses this career path,” Cui added.

DeRamus said he has been passionate about science since his childhood and is honored to communicate the results of his research to a broader audience. His research is supported by the Arkansas GREEN Research Center.

In October, DeRamus attended Arkansas IDeA Network of Biomedical Research Excellence Conference in Fayetteville, where he earned a second place award in the physics section.