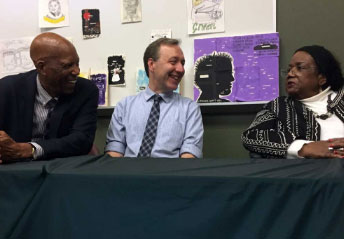 In commemoration of the 60th anniversary of the integration of Central High School, John Kirk, director of the Anderson Institute on Race and Ethnicity at the University of Arkansas at Little Rock, signed copies of his books on African American civil rights history in Arkansas along with members of the Little Rock Nine.

Reliving history with members of the Little Rock Nine was both “humbling and enlightening,” Kirk said.

“What is remarkable about the Nine is not just what they did back then in 1957 as teenagers in desegregating Central High, but what outstanding models of civil rights heroes they have continued to be ever since,” Kirk said. “Still today, sixty years later, they rise to their responsibilities with incredible good humor and grace, while continuing to be steadfast and uncompromising in their ideals and in their pursuit of justice and equality.”

Kirk autographed copies of his books, “Redefining the Color Line: Black Activism in Little Rock, Arkansas, 1940-1970” and “Beyond Little Rock: The Origins and Legacies of the Central High School Crisis.”

Members of the Little Rock Nine shared their stories with members of the public and encouraged students to continue to be strong and strive for equality.

“The most memorable and clear collective message from the Nine is that the struggle for educational equality continues today, and that they are still very much part of that ongoing struggle,” Kirk said.