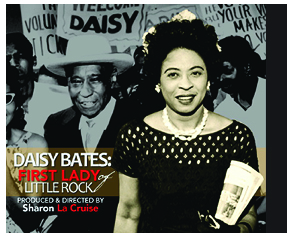 The late Daisy Bates, L.C. Bates, and Christopher Mercer Jr. were the 2012 Arkansas Civil Rights Heritage honorees along with the members of the Little Rock Nine. They were honored for their dedication to obtaining equal rights in education in Arkansas, particularly, during the integration of Central High School.

Daisy Gatson Bates was a well known activists for civil rights in the African American community by the time the U.S. Supreme Court passed Brown v. Board of Education of Topeka, Kansas officially declaring segregated schools unconstitutional. She and her husband were very active in the NAACP and ran a newspaper, The Arkansas State Press, that primarily focused on civil rights issues in the black community.

She was actively involved in the NAACP and was named president of the Arkansas Conference of Branches, the umbrella organization for the NAACP in Arkansas in 1952. Bates became a key player in the Aaron v. Cooper case in which African American children sued the Little Rock School District for not allowing them to attend then all white schools. This case would set the stage for the eventual desegregation of Central High School.

During the Central High crisis, Bates was a mentor to the Little Rock Nine. Bates became known as the principal spokesperson and leader for the movement to desegregate Central and became a state and nationally recognized advocate for civil rights. She and her husband, L.C. Bates, the Little Rock Nine, and their families endured threats and harassment during the school year. She continued her efforts despite the intimidation tactics. She was recognized by Associated Press in 1957 as the Woman of the Year in Education and she served on the national board of the NAACP in periodically through 1970.