A client of the Arkansas Small Business and Technology Development Center since 2010, Poly Adaptive was originally founded to commercialize nanotechnologies from the University of Arkansas at Little Rock’s Center for Integrative Nanotechnology Sciences.

Previously, the Poly Adaptive team has proven through Small Business Innovation Research awards that the EDS technology effectively operates through a transparent, electrostatic-based system to self-clean dust and debris buildup on small-scale applications such as camera lenses for railroad inspection systems and solar panels for space applications.

Major industry leaders in solar power have shown an interest in a large-scale EDS that could clean large solar panels found on the rooftops of commercial and residential buildings.

Industry leaders in solar photovoltaics have reported the average cost to clean a solar panel to be $8,000/megawatt per month. Based on this figure, the cost to clean 9,400 MW for the entire country would be$920 million per year. Once Poly Adaptive’s self-cleaning EDS is proven effective for large-scale solar panel applications, the costs associated with cleaning these panels would be negligible, resulting in tremendous cost savings for the industry.

Buhler also noted, “There is also a significant reduced risk of personnel hazards associated with the EDS which does not require manpower to physically have to handle or reach solar panels for cleaning.”

Since receiving an Arkansas Science and Technology award in May 2014, the team has made great strides with the development of the EDS. “We have been able to fabricate large EDS prototypes on scales never before achieved,” said Buhler. “We have been able to formulate a prototype that satisfies all of the engineering requirements. The EDS prototypes are lightweight, transparent, flexible, and inexpensive.” 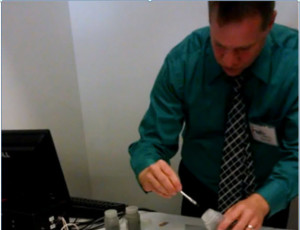 Poly Adaptive has been an ASBTDC client since 2010.“The ASBTDC staff was extremely helpful in the application process as well as instrumental in providing materials for the presentation required to obtain the necessary funding. Without the help from the ASBTDC this project would not be possible,” said Buhler.

The company demonstrated its technology at the Arkansas Technology Summit (pictured) held at the Argenta Innovation Center in November.

Poly Adpative’s long-term goal is for each solar panel system sold in the U.S. to have an incorporated EDS. Once the technology is proven and bought into by the industry, the company anticipates strong commercialization potential.

Buhler remarked, “There are several interested industries who are awaiting our successful test of the EDS on solar panels, specifically those for utility companies.”