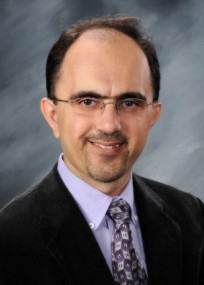 Shortly after coming to UALR from Rennsselaer Polytechnic Institute (RPI) in 2006, Dr. Tansel Karabacak set about creating new thin films in a nanostructures lab. The lab houses state-of-the-art fabrication and testing equipment, as well as computational tools for analysis and modeling studies.

Perhaps even more impressive, Dr. Karabacak’s group constructed most of the lab equipment by high international standards in order to meet specific requirements of his cutting-edge research, making maximum use of available start-up funds in the process.

The lab has attracted numerous local, national, and international scientists for collaborative research projects. It also provides research opportunities for graduate, undergraduate, and high school students in central Arkansas. Dr. Karabacak has collaborated with 17 faculty members at UALR and 25 national and international researchers.

Dr. Karabacak and his group of researchers recently received a $300,000 National Science Foundation (NSF) grant aimed at developing a new generation of fuel cells that are environmentally friendly. The team’s focus on new nanostructured polymer electrolyte membrane (PEM) fuel cell electrodes offers one of the most promising sources of alternative energy.

He will collaborate with the leader of the Hydrogen and Fuel Cells Materials Group at the Argonne National Laboratory in Chicago, one of the U.S. Department of Energy’s largest national laboratories for scientific and engineering research. Importantly, the fabrication of the nanorod PEM fuel cell electrodes will be done in Dr. Karabacak’s lab.

He has also worked on projects with three companies and established connections with 15 program managers from federal agencies, by seeking research funding from such sources as the NSF, NASA, and the Department of Energy. Funding from various grant sources has totaled about $850,000.

“What stands out is the sustained excellence of his scholarly work,” said RPI Professor Nikhil Koratkar. “He shows exceptional promise for growth and continued productivity. He is a rising star and his future appears bright.”

Dr. Karabacak serves as chair of the American Vacuum Society Thin Films Division, the top ranking international organization for professionals in his field. He earned a Ph.D. and an M.S. degree from RPI’s Department of Physics.