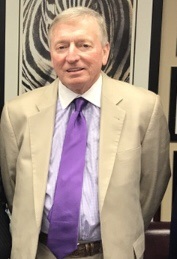 William R. Simpson, Jr., the Chief Public Defender for the 6th Judicial District of Arkansas, was named Mentor of the Year at the 2019 Bowen Awards, hosted on February 23, 2019, by the UA Little Rock William H. Bowen School of Law.

During Simpson’s time as Chief Public Defender, he has employed and mentored numerous Bowen law students as Rule XV law clerks. He has participated in both the Bowen Mentorship Program and Externship Program. He has served as an adjunct instructor for both the University of Arkansas at Little Rock main campus and the Bowen School of Law, teaching various courses in criminal law.

“I am the most recent in a long line of Bowen students who have benefited from Bill’s participation in our legal education,” said first-year law student Fiona Duffy. “He is a great reminder to our legal community at Bowen, in Little Rock, and the state of Arkansas of the thanks we owe to those of us who will selflessly dedicate their professional life to public service and do so without expecting any thanks.”