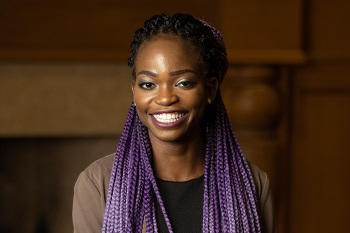 Aisosa Osaretin, a first-year concurrent Juris Doctor student at the UA Little Rock William H. Bowen School of Law and University of Arkansas Clinton School of Public Service, was crowned the winner of the Miss Nigeria International Pageant in Osseo, Minn., on Dec. 14.

Miss Nigeria International aims to bring back the beauty, elegance, prestige and pride that is associated with beauty pageants by actively working to promote literacy, enhance women development, and improve corporate social responsibility.

“My forum focuses on human rights advocacy, especially on the aspect of women as pawns in conflicts,” said Osaretin, a native of Benin City, Nigeria.

Osaretin will dedicate at least four hours per month to her forum for the duration of her reign. She has appearances scheduled around the U.S. starting in Minnesota for a convention focused on human rights. She will also make appearances and work with Nigerian and African organizations and media houses to further her work.

“Deciding on my forum was heavily influenced by my experiences while in Nigeria and keeping abreast with situations in war-torn countries like South Sudan, Cameroon, and Syria where human rights violations seem to be the order of the day,” Osaretin said.

Since the beginning of her reign, Osarentin has made appearances on the Crystal and Freddy Show on Minnesota Television Network on Dec. 26 and the TempoAfricaTV on Dec. 31. Additionally, she will meet with the Edo Association of Minnesota in the near future.

Osaretin said she will begin reaching out to human rights organizations in an effort to form partnerships to further her forum. She said that it is her goal to attend at least one of the six major human rights conventions to be held in 2020.

Osaretin graduated from the University of Benin with a degree in philosophy. She has worked as a law clerk at the Sanford Law Firm in Little Rock and the Pulaski County Prosecuting Attorney’s Office. Additionally, she is a Court Appointed Special Advocate for Children. She completed a law clerkship with Windstream Communications in the fall semester.

Originally written and published by the University of Arkansas Clinton School of Public Service. Reprinted with permission.