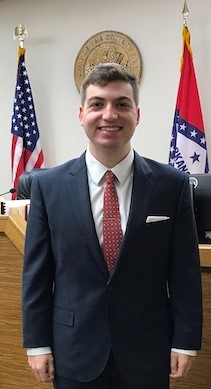 Nathan Johnson, a third-year law student at the UA Little Rock William H. Bowen School of Law, has made the most of his “COVID summer”:  he’s just been selected to join the United States Air Force JAG Corps.

Nate began law school at Bowen with no idea what he wanted to do. However, as he took Professor Terrence Cain’s Criminal Law course, he realized he was passionate about criminal law.

“I was learning everything I needed in other classes, I was grasping the concepts, but there wasn’t that ‘spark’ you look for in a career,” Nate explained. “But criminal law—its history and importance, what is at stake–was intriguing. It clicked in a way nothing else had. I knew I wanted to have a career where I could give it my primary focus.”

Over the summer, Nate realized that a career with Air Force Judge Advocate General’s office aligned with his goals after law school. The Air Force JAG Corps trains their airmen to spend their four-year assignment handling multiple kinds of legal matters: they provide legal assistance to all airmen and  advise on-base senior officers regarding various matters. But one of the primary roles for airmen during their first four years of assignment is prosecuting court-martials.

“My trial team skills will be immediately put to use, and I know that I’ll be as ready as I can,” Nate remarked.

“In that capacity, I attended practice, listened to competing team members practice their case, and gave feedback on examinations and opening and closing statements. Essentially, I spent that whole time learning,” Nate said.

This year, he’s competing on the team. He and his partner, Daryl Bernard, Jr., are preparing for this semester’s competition.

One professor’s impact on Nate stands out as the reason he is so excited to participate in both competitions and the immediate trial work he will experience as a member of the Air Force JAG Corps.

“Professor Minarcin is the best thing that could have happened to me in law school,” Nate said. “He’s like the Yoda of trial team. He has invested so much time in us, giving us the skills to be effective trial advocates. I don’t know where I would be now if it weren’t for his instruction and coaching. He has been a huge blessing to me both as a student and as a person.”

While preparing for trial team competitions, Nate is also a student in Bowen’s new Veterans Legal Services Clinic this semester. Under the supervision of clinic director Professor Rebecca Feldmann, Nate will handle at least one case involving a service-connected disability compensation appeal or request for reconsideration of discharge status. He will also be completing his Rule XV clerkship with the Pulaski County Public Defender’s office. As a Rule XV clerk, he will represent clients in court under the supervision of a licensed attorney.

“It’s the best combo I could ask for,” Nate said. “I’ll be gaining experience in the public defender’s office and in the legal clinic while completing the process of joining the JAG Corps.”

While Nate has been selected to join the JAG Corps, the process has only just begun. He is currently in the process of getting medically cleared to join the military and will receive his base assignment after he takes the bar exam. Before he starts his four-year assignment, he will spend four months at Officer Training School (OTS) and another three months at the Judge Advocate Staff Officer Course (JASOC), where he will learn how to handle court-martials and compete in mock trials against senior instructing officers. After his four-year assignment is complete, Nate can choose to take on another assignment with the Air Force and pursue criminal law-focused career paths, including defending court-martials.