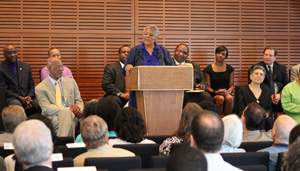 Minnijean Brown Trickey, like the other members of the Little Rock Nine experienced verbal and physical harassment throughout the school year. Trickey was first suspended, and then expelled, for retaliating against the daily torment.

Brown moved to New York after receiving a scholarship to New York’s New Lincoln School, a private progressive school in Manhattan. She graduated in 1959. Trickey received a bachelor of social work degree in Native Human Services from Laurentian University and master’s degree in social work from Carleton University in Ontario, Canada.

Trickey is an activist who has worked tirelessly on behalf of social issues such as diversity education and training, cross-cultural communication, peacemaking, environmental issues, and social justice advocacy. Due to her dedication, she has  received numerous awards for her community work for social justice, including the Lifetime Achievement Tribute by the Canadian Race Relations foundation and the International Wolf Award for contributions to racial harmony.

Her Thoughts in 1957
“Race relations are alright as long as we are giving our lives to the war or working hard, but when the time comes for equalization, we are turned down.”