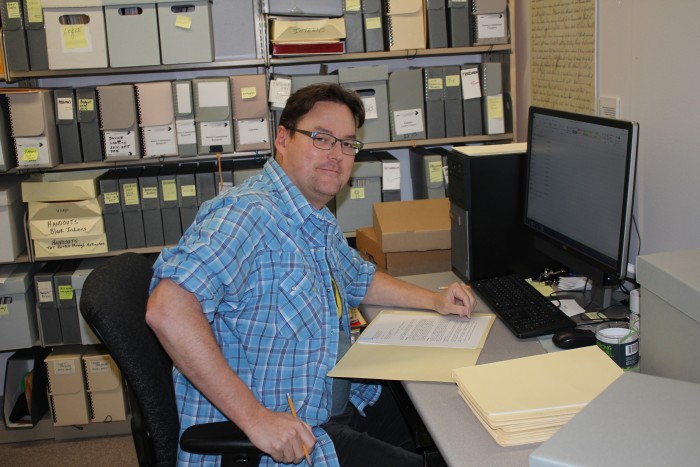 SNRC director Dr. Daniel Littlefield states, “The Center has made working with students a priority since we began in 1983 and has been fortunate to have some outstanding students come through the Center in that time. Desmond is a hard-working student, who is eager to learn and apply that knowledge to future projects.”

Hassing is a graduate student at San Diego State University in the Department of Theatre working towards a Master of Arts and a member of the Choctaw Nation of Oklahoma. He will work in the Center this summer doing archival processing, working to prepare collections to be used by scholars and make them searchable in the Center’s online catalog.

“I am honored to receive the Shakopee Mdewakaton Sioux Community Internship,” says Hassing. “The education on archive methodology I am receiving at the Sequoyah National Research Center will help me distill and archive my own research in a manner that will allow it to be accessed by both scholars and interested parties throughout Indian Country. It is my hope that the tools I learn at Sequoyah will lead to a broad discussion both throughout my own tribal community and Indian Country at large about how Indigenous people have traditionally, and continue to be, depicted within the medium of comic books. I am grateful for the opportunity to learn these skills and hope that it will lead to a greater understanding among mainstream audiences that many of the representations presented by the media of Indigenous people are simplistic, inaccurate, and harmful.”

About the Shakopee Mdewakanton Sioux Community

The Shakopee Mdewakanton Sioux Community is a federally recognized, sovereign Indian tribe located southwest of Minneapolis/St. Paul. With a focus on being a good neighbor, good steward of the earth, and good employer, the SMSC is committed to charitable donations, community partnerships, a healthy environment, and a strong economy. Out of a Dakota tradition to help others, the SMSC has donated nearly $300 million to organizations and causes since opening the Gaming Enterprise in the 1990s.

About the Sequoyah National Research Center