April 2022 Feature – A PARADE OF PLANETS

As the planets of our solar system move around the Sun in their various orbits, and at their own individual speeds, from our vantage point here on Earth (which is also moving around the Sun) we see them appear to wander against the starry background. On not so rare occasions, we will see two or more of them meet up with one another for what appears to be a close grouping. These close pairings or groupings are called “conjunctions” and they can make for interesting naked eye observing. As I said, conjunctions are generally not so rare, there are often one or more each month. But some alignments are rarer than others. For example, close pairings between Jupiter and Saturn, such as the one we saw in December of 2020, only happen once every 20 years or so. 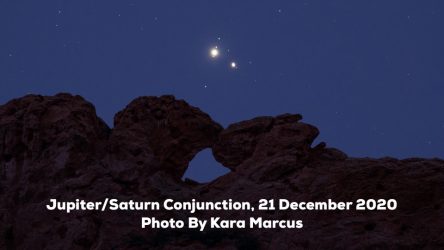 In contrast to conjunctions are parades of the 5 naked eye planets upon a small region of the morning or evening sky. These events are a bit rarer and generally happen every few years. To the best of my knowledge, there is no official designation for such alignments and I just refer to them as “planet parades”. This month we will get to see 4 of the five naked eye planets form a parade across the predawn sky and, when we throw in a waning crescent moon you’ve got yourself a lovely cosmic spectacle. 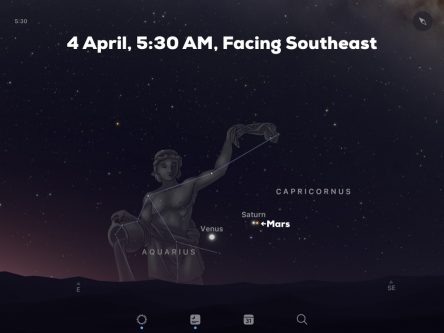 Before we get to the prime dates around mid-month, I urge you to get outside an hour or two before sunrise on April 4th. Face southeast and you will see Mars and Saturn in a very tight conjunction. Make sure that your view is unobstructed towards the horizon. The planets will appear as two bright points with Mars being the one that is redder in terms of color. Bright Venus is off to the left. I want you to pay close attention to where the planets are located and their apparent closeness to one another. This will change as the Earth, and the other planets continue to go about their orbits around the Sun. Notice how different this arrangement will be in the weeks ahead.
You may have noticed that we are missing our 4th bright planet in that April 4th conjunction. Who’s missing? Why it’s Jupiter, King of the Planets. By around the 17th, Jupiter can be seen inching its way up above the eastern horizon and it’s on the 23rd that the planet parade really gets going. On the morning of the 23rd, about an hour or two before sunrise, go outside and face east. Provided that your view to the horizon is unobstructed and the sky is cloud free, you should see Jupiter and Venus shining brightly just above the horizon. Let your eye trace out an arc heading towards the west, and you will see Mars and Saturn as well. Just to the west of Saturn, you will find the waning crescent moon. Wow, what a beautiful sight! As an added bonus, but a challenge object to see, will be the planet Neptune, just to the right of Jupiter. You will need binoculars or a telescope to see it. Conspicuous in its absence is fleet footed Mercury, whose presence is only to be found in the evening sky later this month. 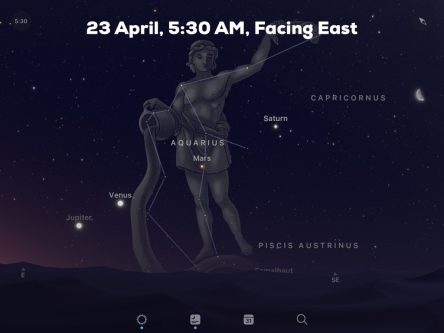 After the 23rd, watch closely as, each morning, the moon appears to pair up with different planets as it heads lower and lower in the sky over the following mornings. It appears to move more quickly compared to the more distant planets because it is closer to Earth and orbiting at a faster rate (it completes one orbit around the Earth once every 27.3 days). The path across the sky in which the planets, moon, and Sun all appear to traverse is known as the “ecliptic”. It’s largely an imaginary line but it does represent the orbital plane of the Earth around the Sun, and the moon and other planets also all orbit in roughly this same plane as well.
But what if you miss this particular alignment? Don’t fret, the moon will continue to glide amongst the planets up until month’s end while the planets themselves will remain around in their alignment for several weeks in May, albeit with a bit of a switcheroo. On the morning of May 1st, Venus and Jupiter will be so close together upon the sky, you may need binoculars to separate them. Over the coming days thereafter, it will appear as though Jupiter has overtaken Venus and left it behind as it continues to rise higher and higher in the early morning sky. Later in the month, on May 21st, the moon again appears among the morning planet parade. But the parade becomes even more spectacular in June. On the 24th of that month you will see the five naked eye planets spread out across the sky: Mercury, Venus, Mars, Jupiter, and Saturn. Adding even more grandeur to all this eye candy will be the crescent moon on this date. Holy planetpalooza, Batman! The downside is that they are all spread out across such a large area of sky that you will not be able to get them all in a single photo like you can with the four planets and moon this month.

As you gaze upon spectacles like this you are doing so in two dimensions and it’s easy to forget that the reality before you is actually taking place in three dimensional space. What you are seeing is not like the image depicted in the graphic below.

Ever since grade school, we’ve all seen graphics like this that show the planets all lined up in a row. This is poetic license on the part of the artist and is done merely for the sake of convenience. The odds of you living long enough to see anything even remotely like this illustration are, well, astronomically low. Yes, all the planets orbit more or less within the same plane around the Sun. But there is a very important factor that undermines the idea you might come away with after looking at an image like this. Namely, because of the way the orbits are oriented and tilted the eight major planets of our solar system can never come together in such a perfect alignment. 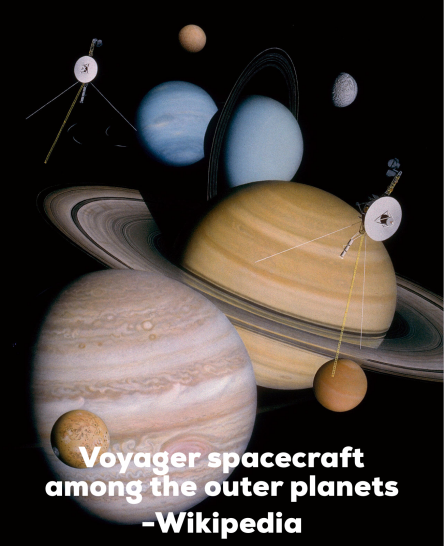 During one close approximation of such a configuration, during the 1970’s when the outer planets were in a once-every-175-year alignment, NASA decided to take advantage of it when sending the twin Voyager probes out to explore Jupiter, Saturn, Uranus, and Neptune. This so-called “Grand Tour” allowed the spacecraft to use the gravity of each planet as an assist to send them on to their next destination. Kind of like a gravitational stepping stone assist in order to hop to the next planet without the need to use fuel to propel them on.

In the case we now have before us, keep in mind that the planets are not aligned like they are in the graphic, they are all staggered out at different distances and in different positions relative to one another and to the Earth. Bottom line: you are just seeing a line of sight perspective that gives the illusion that the planets are all arranged in some kind of unique, straight line configuration. The main thing I want to impart to you is to just get outside and enjoy this snapshot in time as the planets and moon go through their minuet around the Sun. I’m sure that just the pure aesthetics of such a sight are enough to leave you in both awe and wonder.