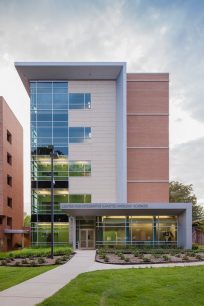 The Center for Integrative Nanotechnology Sciences (CINS) building received LEED® gold certification status from the U.S. Green Building Council. It is a $15 million, five-story building that provides research facilities for scientists and students to explore the interface between nanomaterials, plant biology, and mammalian biology. The center’s 50,534 square feet houses laboratories and a greenhouse on the roof, along with office space for Dr. Alexandru S. Biris, his nine-member research team, and other staff.

Seventeen percent of the construction work was performed by minority business enterprises. The contractor for the building was East Harding, Inc.; architectural firm was Witsell Evans Rasco; and engineering firm was TME, Inc. Funding for the project allowed for completion and furnishing of the first three of five floors.

The Charles W. Donaldson Student Services Center (SSC) received LEED® gold certification status from the U.S. Green Building Council. It has also won a Bronze Award in the Higher Education category in the Brick in Architecture awards competition and received the American Institute of Architects Honor Award for excellence in architecture and urban design in Arkansas.

The SSC is a modern four-story building for all student services and campus administration. Within the building, students can apply, register, find out about financial aid, talk to advisers, and apply for graduation. Located adjacent to the Ottenheimer

Library and adjoining the Donaghey Student Center by skywalk, the building houses such offices as Administration, Admissions & Financial Aid, Records & Registration, Student Accounts and Cashiers Office, and a 205-seat auditorium. The building was designed by architects Polk Stanley Wilcox and TME, Inc. and DCI Engineers. CDI Contractors, LLC was the general contracting firm.

The George W. Donaghey College of Engineering and Information Technology (EIT) building received LEED® gold certification status from the U.S. Green Building Council. The six-story building was the first LEED gold facility in the University of Arkansas System. The interior design of the building has been awarded the Silver Level Award in the category of sustainability from the South Central Chapter of ASID, the American Society of Interior Designers.

The projected energy savings is $34,675 annually as compared to costs that would have been incurred if the structure were merely built to code.

Numerous sustainability technologies incorporated into the building contributed to achieving the gold certification, including:

The Nursing Building received LEED® gold certification status from the U.S. Green Building Council. It underwent extensive construction and design remodeling at a total cost of about $7 million and is located in the former Administration Building.

The building showcases a new 22-bed, state-of-the art simulation hospital in a 9,500-square-foot facility in which students deliver patient care in a realistic environment. It provides over 3,800 square feet of space in addition to a 1,762 square foot computer learning resource center with a 100-station computer lab and student lounge area in addition to two 98-seat auditorium style and one 60-seat classroom with modern teaching technology. The building was designed by Taggart Architects and Bernhard TME, and it was built by East Harding Construction.

The Trojan Grill received LEED® silver certification status from the U.S. Green Building Council for its sustainable features including energy efficient HVAC and lighting systems. This is the first retail LEED Silver Certification in the state. The 3,800 square-foot building – designed by Witsell Evans Rasco Architects, engineers TME Inc., and Development Consultants Inc. – was built by general contractor Baldwin and Shell.

West Hall received LEED® gold certification status from the U.S. Green Building Council. It also received the ASID Excellence in Design Silver Award. It is located in a cluster of residence halls on the east side of campus and houses academic scholarship students including members of the Chancellor’s Leadership Corps. The new hall was built to promote camaraderie. The pod-style residences include two sides – one for men and one for women. On each floor, rooms housing two students each surround a common area, which includes a full kitchen with stainless steel appliances, a family-style dining room table, flat-screen televisions, and laundry and baths.

The building was designed by Witsell Evans Rasco architects and TME Inc. engineers, and it was constructed by Baldwin and Shell builders. April Ambrose, LEED AP BD+C sustainability consultant, was the senior project manager.

The features in the building that helped earn the LEED Gold rating include:

The contractors who built the residence hall also added to the LEED Gold score by reducing the amount of waste sent to landfills during construction by recycling of plastics, metals, paper, cardboard, and glass. Over 88 percent of the total waste generated during construction of West Hall was diverted away from landfills, allowing for the recovery of recyclable and reusable materials, and when new materials were used for construction, 10 percent of them were made in part with recycled content. Twenty-eight percent of the construction materials used in the facility were extracted and manufactured within 500 miles of the site, further reducing the carbon footprint.