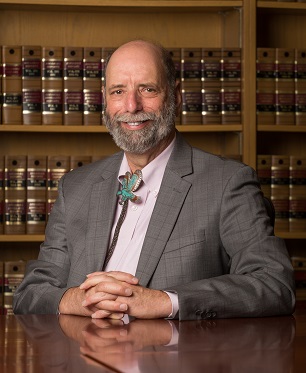 Professor Kenneth S. Gallant of the UA Little Rock William H. Bowen School of Law has been named the Ben J. Altheimer Professor of Law. This honor was unanimously conferred by the law school faculty in December 2017.

Gallant has taught at Bowen since 1999, anchoring the Law School’s course offerings in the public side of International Law. He currently teaches Criminal Law and Conflict of Laws as well. Over his nearly two decades of service, he has also directed the Legal Clinic, and taught, developed curriculum for, and supervised the Lawyering Skills I program.

In 2015, Professor Gallant was elected to the American Law Institute. He is also an associate member of the International Academy of Comparative Law. This year he is completing a four year term as a member of the Disciplinary Appeals Board of the International Criminal Court. Previously he served as the first Representative of Counsel on the ICC’s Advisory Committee on Legal Texts (roughly equivalent to the Rules Committee of a US court).

Before entering teaching, he served first as a law clerk to the late Judge Samuel J. Roberts of the Supreme Court of Pennsylvania and the late Judge Louis H. Pollak of the United States District Court for the Eastern District of Pennsylvania. He served as a prosecutor and later as Attorney-in-charge for Special Litigation with the Office of the District Attorney of Philadelphia.

He has been selected as a Fulbright Scholar three times, serving in Nepal, India, and most recently in Norway. He also served as a Legal Specialist in clinical legal education for the American Bar Association in Croatia and Macedonia in 1994. He was also a Fellow of the Martin Institute for Peace Studies and Conflict Resolution while teaching at the University of Idaho College of Law.

The Ben J. Altheimer Distinguished Professorship was created by the Ben J. Altheimer Foundation to honor its namesake, a successful attorney and devoted friend to higher education. Mr. Altheimer was born in Pine Bluff in 1878. He practiced law in Pine Bluff and moved to Chicago in 1910, where he established one of the most prestigious law firms in the city. He frequently returned to Arkansas to visit and involve himself in the farming operation near Altheimer, the town named for his father and uncle.