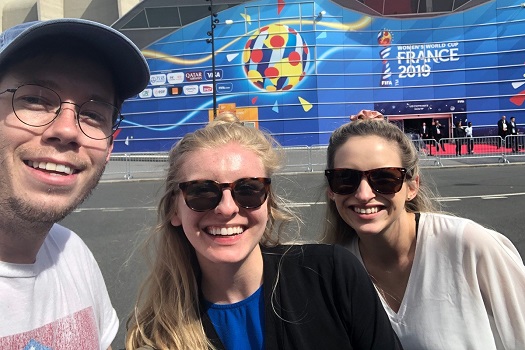 Corinne Kwapis, a student at the UA Little Rock William H. Bowen School of Law who is pursuing a concurrent Master of Public Service degree at the University of Arkansas Clinton School of Public Service, recently completed her International Public Service Project with Women Political Leaders. WPL is an independent non-partisan foundation based in Brussels, Belgium, that serves as a global network of female politicians.

“Equal representation of women and men in government ensures that policy development remains inclusive, thoughtful, and progressive,” Kwapis said. “Given our current challenges related to cyber-security, global development, and climate change, we must seek innovative solutions, which requires women to sit at the policy making table.”

Kwapis worked with WPL’s Programme Team, assisting in the creation and development of Policy Focus Sessions that were conducted as part of the WPL Summit, an annual conference that serves as the world’s foremost gathering of female political leaders. The 2019 WPL Summit was held June 25-27 in Tokyo before the G20 Summit in Japan.

The Policy Focus Sessions served as interactive discussions between panelists and participants about topics relevant to global affairs and women in politics. Some of the topics for these sessions included “The Role of Parliamentarians in Promoting Diversity and Inclusion,” “Data Beyond Borders,” and “Putting Policy to Work: Promoting Women and the Economy.”

The global nature of the WPL Summit – which welcomed nearly 400 heads of state, ministers, and parliamentarians from 85 countries – required Kwapis to communicate with international offices across numerous time zones and languages. “Work hours had to be flexible to ensure timely communication with our co-hosts in Japan, and sponsor and Parliamentarian offices around the world,” Kwapis said.

In many ways, the politically engaging nature of WPL’s mission is a continuation of the type of work Kwapis has pursued since high school.

A native of Fairview Heights, Ill., she worked with the League of Women Voters of Metro St. Louis. As a student at Marquette University, she volunteered with the Milwaukee Justice Center, a legal help center assisting Milwaukee County’s low-income, unrepresented litigants. Additionally, she volunteered in the offices of Milwaukee Mayor Tom Barrett and United States Senator Kirsten Gillibrand. Currently, she is a member of the League of Women Voters of Pulaski County and sits on the Arkansas Counts State and Local Government Sub-Committee to ensure a complete count for the 2020 Census.

“I’ve always had an interest in civic engagement and politics,” Kwapis said. “The organizations I have been a part of typically focused on issues at a local level, so working at the international level has been a new and exciting experience for me.”

Kwapis said her passion for civic engagement dates back as far as she can remember. She recalls one specific experience from elementary school that fueled her interest.

“I was inspired by Condoleezza Rice and wrote about her in an essay in the fourth grade that later made its way to her, and she sent back a note and an autographed headshot.” Kwapis said. “When I was in high school, I had the opportunity to hear her speak and that felt surreal!”

That same passion for civic engagement has influenced her academic pursuits. In addition to her current pursuits, she earned her undergraduate degree in women and gender studies.

“Supporting women in politics internationally is a natural manifestation of my academic background and professional experiences,” she said. “I recognize the gravity of the work that WPL does and the necessity of supporting a network for women political leaders to ensure global security, growth, and progress.”

Her eight weeks with WPL in Belgium included more than work. Along with classmates Christian Scott-Richards and Alex Tingquist, Kwapis traveled to Paris to watch the United States Women’s National Team defeat Chile in the World Cup. And she had plenty of time to enjoy – and educate herself on – Belgium’s world-famous waffles.

This fall, Kwapis will resume her concurrent degree path with the Clinton School and Bowen Law. Long term, she is interested in working in government and will continue working as a law clerk in the Pulaski County Prosecutor’s Office.

Article by University of Arkansas Clinton School of Public Service. Reprinted with permission.