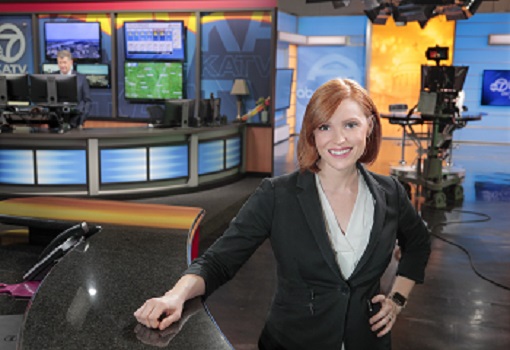 A KATV reporter is using the skills and knowledge she learned at the University of Arkansas at Little Rock William H. Bowen School of Law to serve as a better advocate for Arkansans.

As a journalist who covers the Arkansas legislature, Cline feared her gap in legal knowledge was impacting her ability to accurately report complex issues to the public.

“I’d ask different legislators about a bill, and I would get completely different answers about how the law would affect Arkansans,” she said. “As a journalist, you want to fact check what people are telling you, but I couldn’t do that with the law. I wanted to understand the law better and how proposed laws would affect Arkansans.”

On Nov. 7, 2014, Cline searched the internet on “how to go to law school” and learned she needed to take the LSAT (Law School Admission Test) to apply. She took the test four weeks later and entered Bowen’s part-time law school program, the only program of its kind in the state, on a full ride in August 2015.

“Bowen is the only law school I applied to, and they offered me a full scholarship,” Cline recalled. “I love my job, and I didn’t want to leave it. I decided to go to law school even if it meant working and going to school at the same time. It was worth it.”

During law school, Cline had some life-changing experiences; she got engaged and married fellow Bowen law student, Jason Cline, a member of the Arkansas National Guard, in January 2017. The birth of their son, Luke, caused Cline to miss a final exam.

“I had my son during the first day of exams in April 2018,” Cline said. “I missed my insurance law exam because I was having a baby. I had to call my professor and tell her I wouldn’t make it, but I was able to take the exam the next week. I have a funny picture of me in the hospital studying insurance law in between contractions.”

“Despite her busy life and the demands on her time, Janelle was always prepared to engage in and raise the level of discussion in class,” Gustafson said. “She is incredibly hard working, curious, and detailed in her learning. Beyond that, she is a kind, generous human being. She was a joy and will do great things in the world, and by that I mean great things for the world.”

cummings described Cline as a gifted law student and talented news anchor who inspired his own son to study broadcast journalism in college.

“I fully expect that Janelle will become an important and consequential legal reporter and news anchor that could very well successfully practice entertainment law or First Amendment law if she so chooses,” cummings said. “When I mentioned to Janelle that my teenage son was interested in a career in broadcast journalism, she immediately set him up with a two-week internship at KATV, which my son completed this summer. My son loved the experience.”

At Bowen, Cline was able to gain practical legal knowledge through work opportunities. She served as a law clerk for Steel, Wright, & Collier and completed externships with Chief Judge Rita Gruber in the Arkansas Court of Appeals, Judge Carlton Jones in the Eighth South Judicial Circuit, and the Pulaski County Prosecuting Attorney’s Office. She’s especially grateful for the experience she gained working for Judge Gruber.

“I will cherish my externship with Judge Rita Gruber for as long as I live,” Cline said. “Judge Gruber is everything I hoped a judge would be. She is thoughtful and serious about her job and was open to my recommendations in the memoranda I would write for her. It was memorable and so rewarding. I learned so much working in the actual court. It’s completely different than covering it as a reporter.”

Cline says she fell in love with journalism completely by accident while attending the University of North Carolina at Charlotte.

“As an undergrad, I was a double major in political science and communication studies,” Cline said. “I had to do an internship that satisfied the requirements for both, and I thought, ‘What’s better than NPR?’ That’s communication and politics all in one.”

On her first day at NPR, Cline hit the ground running. Her new boss handed her a sheet with directions from MapQuest, a press release, and an audio recorder with instruction to complete her first assignment.

“I called my mom and cried because I didn’t know how to be a journalist,” she said. “I was never planning on being a journalist. I overreported, but they helped me craft a story. That night, I heard my story on the radio, and I knew I had to do this for the rest of my life. From then on out, it was journalism forever.”

As for her goal of being a better journalist, Cline’s legal knowledge has been especially helpful in reporting complex issues including legislation, court cases, and crimes. She recalls broadcasting for 10 hours straight in 2017 when reporting on the eight executions originally scheduled in Arkansas for April 2017, four of which were carried out.

“During the executions, you had dozens of court cases making their way through the system with appeal after appeal,” Cline said. “I was able to explain to viewers why each appeal was happening, who was making the decision, and condense the legal arguments for the viewers. I never would have been able to do that without going to law school.”

Earlier this year, Cline was part of a group of KATV journalists who won a Mid-America Emmy for their news special, “Arkansas Growing: The Journey from Legalization to Cultivation,” covering Arkansas’s legalization of medical marijuana and its impact on employment law.

“I came to Bowen because I saw this deficiency in myself and my reporting, and I’m walking away feeling so much more confident in my ability to understand the law,” Cline said. “Being in law school has made me a better reporter. The questions I ask are sharper, and I know more going into interviews. I’m a little sad to graduate because it was such a good experience. I love learning, and I’ll be sad not to engage in my legal education every day.”