To Kosovo, by way of Arkansas – social enterprise and cultural exchange

Three years ago, Professor Kim Vu-Dinh left a teaching fellowship at Yale Law School to serve as the inaugural director of, and create the programming for, the Business Innovations Legal Clinic at the UA Little Rock William H. Bowen School of Law. Since then, she and her students have been providing transactional legal services to rural farmers and butchers, urban arts organizations, tech start-ups, and everything in between. Most of these organizations and businesses were introduced to her through the University of Arkansas system.

The Clinic also hosts about a dozen community legal workshops a year throughout the region, and manages the Innov-Eat Café, an incubator space where the Clinic’s food clients sell catered items on the law school campus.

“Arkansas is filled with a lot of collaborative spirit. I think we are a good example of a how a school can use its many disciplines to serve the community. We get referrals from the business school and the public administration program on main campus, and now we’re even getting referrals and students from the University of Arkansas Clinton School of Public Service’s Social Enterprise student club.”

Social enterprises, Professor Vu-Dinh explains, are the Clinic’s fastest growing type of clients. They are organizations that have a double bottom line of producing sustainable revenue while also addressing a community need.

“I’ve always had an interest in social enterprises, and most of my career before academia has been about helping nonprofits create viable sources of income while serving community-based needs. Now, through the Clinic I also get to help for-profit businesses meet the same goals. The experiential education format is perfect for this too; students get to see how their law degree can serves the community while generating revenue.”

Professor Vu-Dinh also recently became an adjunct instructor at the Clinton School of Public Service where she teaches about social enterprises. 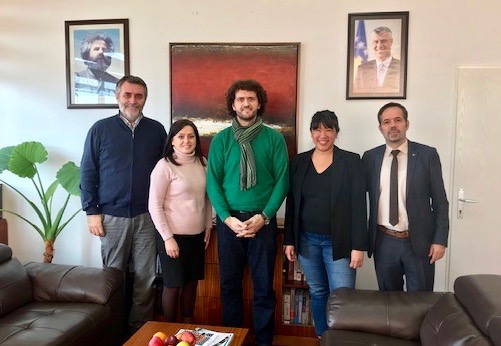 So it wasn’t entirely surprising that she was asked to consult at another university interested in doing the same. What was surprising was that this university was in Kosovo, a small European nation only recently recognized by the US and the European Union in 2008. Once part of the former Yugoslavia during the Soviet era, Albanian Kosovars spent approximately a decade fighting for its independence from Serbia after the fall of the Iron Curtain in 1989. Serbia still considers Kosovo one of its disputed territories, despite having removed the last of its troops in the late 1990s after NATO shelled Kosovo in order to stop the Serbian campaign of ethnic cleansing.

“I know there were plenty of qualified people who applied for the consulting position, but Kosovars have a strong affinity to Bill Clinton because of his role in persuading NATO to enter Kosovo. My professional experience was relevant, but Kosovo is the only foreign country I’ve ever been to where most people had heard of Arkansas, and I think that helped.”

Professor Vu-Dinh was awarded a Fulbright Specialist scholarship to work with the academic leaders at the University of Applied Sciences at Ferizaj, Kosovo, (UASF) a newly created institution focused on sustainable engineering, architecture, sustainable tourism, and business. (The Fulbright cultural exchange program was founded in the 1940’s by US Senator William J. Fulbright who hailed from Arkansas.) For three weeks last winter, Professor Vu-Dinh met with UASF faculty and administration, government leaders, and local entrepreneurs. The experience made a lasting impact on her.

“The work itself was straightforward and definitely in my wheelhouse, but I still learned so much from the people I met. The stories they told me of life during Serbian occupation were unreal—some of them had been freedom fighters before obtaining multiple PhDs overseas. Others actually got refugee status and citizenship in wealthy nations like England and Switzerland and could have lived comfortably as educated professionals over there, but their dedication to their country drove them to return. It was really touching to hear their appreciation for the U.S. Some people over there tear up when they recite speeches given by Bill Clinton and G.W. Bush.; others referred to Arkansas as ‘the land of Bill Clinton’…I just had to bring them to Arkansas to share their experiences with my students and colleagues.”

“I think their experiences will be really interesting to the students of the law school and the Clinton School. They’ll learn about what it means to dedicate yourself to service, about navigating a new legal system that has the remnants of an old, totalitarian regime; they’ll learn about why it’s important to generate revenue AND serve a public interest mission. In turn, the Kosovar delegates will get to see how a university can support the local economy and create learning opportunities for students at the same time.”

And of course, they’ll get to see Arkansas, “the land of Bill Clinton.”