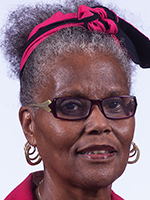 Adjoa A. Aiyetoro joined the UALR William H. Bowen School of Law faculty in 2004. She is currently Professor of Law and the Director of the Racial Disparities in the Arkansas Criminal Justice System Research Project. The project released a comprehensive report of its research findings in August 2015. Aiyetoro served as the inaugural director of UALR’s Institute on Race and Ethnicity from July 2011 to December 2012.

Before joining the law faculty Professor Aiyetoro had a career as a human rights attorney and social worker.  As a social worker, she served as the supervisor for the Malcolm Bliss Community Mental Health Center’s Model Cities’ outpatient program.  Aiyetoro began her legal career as a staff attorney with the United States Department of Justice, Civil Rights Division, Special Litigation Section where she litigated cases involving the rights of the institutionalized and developed an expertise in prisoner rights.  She joined the ACLU National Prison Project in 1981 where she remained until 1992.

Since 1992 Aiyetoro  has served as the Executive Director of the National Conference of Black Lawyers, the Director of Administration for the Congressional Black Caucus Foundation, Inc., a consultant to the Lawyers’ Committee for Civil Rights Under Law, organizing its 1995 delegation to the United Nations Beijing Conference on Women, represented the Women’s International League for Peace and Freedom (WILPF) at the preparatory meetings for and the World Conference Against Racism (WCAR) held in South Africa, and the Chief Legal Consultant for the National Coalition of Blacks for Reparations in America (N’COBRA). In March 2014 Professor Aiyetoro received the Washington University George Warren Brown School of Social Work’s Distinguished Alumni Award and in April 2014 she received the Arkansas ACLU’s Civil Libertarian of the Year Award.

Racial Disparities in Punishments and Alienation:  Rebelling for Justice.

Why Reparations to African Descendants in the United States Are Essential to Democracy, J. Gender Race & Justice (Spring 2011).

Can We Talk?  How Triggers for Unconscious Racism Strengthen the Importance of Dialogue, Nat’l Black L.J. at Columbia University, Fall 2009.

Truth Matters:  A Call for the American Bar Association to Acknowledge Its Past and Make Reparations to African Descendants, 18 Geo. Mason U. Civ. Rts. L.J. 51 (2007)

The Reality of Obtaining Reparations: Present Day Harms as Vestiges of Enslavement, State of the Race – Creating Our 21st Century:  Where Do We Go From Here?, Jemadari Kamara and Tony Menelik Van Der Meer, eds, (2004)

Formulating Reparations Litigation Through the Eyes of the Movement, 58 NYU Annual Survey of American Law Act 457 (2003)

National Coalition of Blacks for Reparations in America: Its Creation and Contribution to the Reparations Movement, Should American Pay: Slavery and the Raging Debate Over Reparations, Raymond A. Winbush, ed., (2003)

The Development of the Movement for Reparations for African Descendants, 3 J.L. Soc’y 133 (2000)

“Reparations Are Like A Train: Mounting the Challenges and Claiming the Victory,” ENCOBRA, Summer 2001

Police Misconduct and Accountability, Amnesty Rights for All, International, USA (1998)

Reparations: The Court’s Role on the Way to Victory, ENCOBRA, Summer 1998