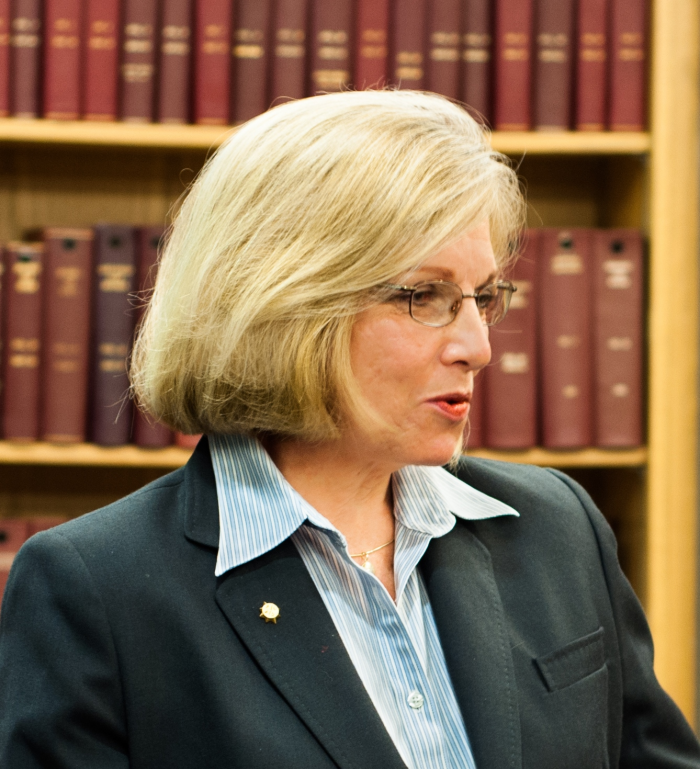 Professor Lyn Entrikin fell in love with the natural beauty, charm, and friendliness of Arkansas while serving as a visiting professor at Bowen School of Law in the fall of 2009 and again for the 2010-11 academic year. She joined the Bowen faculty permanently in June 2011. Professor Entrikin proudly declares Arkansas her new home, frequently extolling its many virtues to her extended family scattered across the United States.

During her early professional work with the Social Security Administration, Professor Entrikin became intrigued with legal analysis, which led her to graduate school. She fell in love with teaching as a graduate teaching assistant at the University of Kansas. Eventually she earned a Master’s in Public Administration from the University of Kansas in 1982, while serving as a member of the professional staff of the Kansas Legislature. She completed her law degree at Washburn School of Law in 1987, serving as Editor-in-Chief of its law journal during the same academic year she became a first-time mother. Four years later she had twins, soon learning to balance the challenges of motherhood with the busy professional life of a lawyer.

Before beginning her academic career, Professor Entrikin practiced law in Kansas for seventeen years, including a term on the Kansas Board of Tax Appeals, the state’s highest administrative tax tribunal. Her varied legal experience has included legislative research, policy and budget analysis, legislative and regulatory drafting, judicial administration, opinion writing, administrative law, state and local tax, appellate practice, litigation, and legal writing of all kinds. After graduating from law school, she worked for five years as a research attorney and administrative assistant to the Chief Justice of the Kansas Supreme Court. Later she served a two-year clerkship with a federal district court judge.

Beginning in 2003, Professor Entrikin taught legal research and writing, legal drafting, and legislation at her alma mater, Washburn University School of Law in Topeka, Kansas. She was the Director of Washburn’s Legal Writing Program from 2004-08 and was granted tenure in 2010. She recently completed two three-year terms on the Board of Directors of the Association of Legal Writing Directors (ALWD), serving as President in 2011-12. She remains an active member of ALWD, currently serving as co-chair of the Association’s Task Force on the ABA accreditation standards and as a member of various other committees. She is a member of the Executive Board of the Section on Balance in Legal Education of the American Association of Law Schools, currently serving on its Program and Nominating Committees.

Professor Entrikin’s scholarship interests are as varied as her practice experience, focusing on public policy and the interrelationships among the three branches of government. She has published articles on judicial rulemaking, administrative law, state and local tax, statutory interpretation, and privacy law. She is presently co-authoring a legal drafting textbook focusing on rule-based public and private law.

Devoted to teaching, Professor Entrikin is often heard reminding her law students that their professional success is her passion. She has long been interested in curriculum development and reform in legal education, particularly innovative ways to integrate legal skills, doctrine, procedure, and professionalism in each course. Professor Entrikin teaches Reasoning, Writing, and Analysis I and II as well as Legislation, including statutory interpretation, drafting skills, and legislative history research.

In her spare time, she loves to travel, read and write historical nonfiction, create with fiber and fabric, and drive her red 2007 Miata convertible on winding mountain roads in Arkansas. She dreams of exploring all fifty-two Arkansas state parks and learning to hang-glide at Mt. Nebo and Mt. Magazine State Parks, two of her favorites (so far).