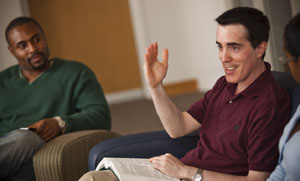 Law professors have three professional responsibilities—(1) teaching, (2) scholarly research, and (3) service to the university and the broader community.  Professor Josh Silverstein excels in all three dimensions.  His colleagues and students describe him as a gifted teacher.  His publications have received national attention from courts and the media.  And his service has included spearheading major curriculum reforms at the law school and advocating in defense of academic freedom and tenure at the University of Arkansas generally.

The phrase “thinking like a lawyer” is shorthand for the two skills that constitute the foundation of all legal work.  The first skill is reading and comprehending legal texts in order to extract the governing legal principles.  To elaborate, laws are rules.  And legal rules are set forth primarily in written documents such as judicial opinions, statutes, constitutions, administrative regulations, and contracts.  A lawyer must be able to read and comprehend those writings to determine which legal rules govern his or her client’s situation.  The second skill is the application of legal rules to new factual circumstances.  For example, a lawyer must be able to assess whether, under the governing legal rules, his or her client committed a crime, breached a contract, or is entitled to payment from another party for personal injury.

The bulk of law school is focused on teaching students to think like a lawyer—teaching the two fundamental skills.  In the primary courses Josh teaches—Contracts I, Contracts II, and Secured Transactions—students receive extensive and rigorous training in the comprehension of legal texts and the application of legal rules to new problems.  Josh primarily accomplishes this using a variant of the question-and-answer technique known as the Socratic method.  Under that approach, the students and the professor work together in class to extract the governing legal rules from the reading assignments.  The students must then apply those rules to various hypothetical factual scenarios—scenarios that are frequently based on cases that Josh worked on as a practicing lawyer prior to becoming a law professor.

“Teaching is the most important of a law professor’s three responsibilities,” Josh observes.  “My highest priority is equipping our students with the fundamental professional skills they need to excel in the practice of law.”

Students love multiple aspects of Josh’s teaching.  But it his enthusiasm, work ethic, and compassion for the students that are highlighted most often.  Here are some descriptions of Josh written by former students:

“His organization of the content, presentation and explanation of the concepts, supplemental materials that he created, attention and concern for students, and overall excitement and enthusiasm are simply incredible.”

“He has his presentations down to a science to promote maximum effectiveness in learning.  All the work, his enthusiasm, and sense of humor make his classes a pleasure”

“Professor Silverstein believes in each of his students and provides them with all the tools necessary to succeed not only in his class but in law school. . . .   His devotion to his students creates an environment that encourages intellectual dialogue and nurtures success.”

Josh also teaches the law school’s legal philosophy course, which is known as “Jurisprudence.”  “Sometimes, it pays to take a step back from the trenches and consider the law from a more theoretical perspective,” he explains.  “The Jurisprudence course gives students that opportunity.”

When a business collapses into bankruptcy, there is not enough money to satisfy the demands of all stakeholders in the company, such as shareholders, directors, officers, employees, lenders, customers, and suppliers.  Deciding how much stakeholders should be paid and what happens to the business going forward are the central challenges of business bankruptcy law.  These tasks have enormous social and economic importance and are often exceedingly complicated.  To facilitate the successful resolution of business bankruptcy cases, the courts have developed some extraordinary legal remedies.  My research focuses on those remedies.  Are they permissible under the law?  Or have the courts gone too far?  And even if the special remedies are legal, do they solve the problems they are intended to address?  Or do they make matters worse?

Josh’s bankruptcy scholarship has been cited in judicial opinions, law review articles, legal treatises, a report from the RAND Institute for Civil Justice, court filings, and other sources.  One reviewer described his work as “exhaustively researched and meticulously and persuasively argued.”

A number of years ago, Josh spearheaded the reform of the law school’s grading policy.  He then turned that work into two law review articles on grading theory.  The second of these pieces, which is entitled “A Case for Grade Inflation in Legal Education,” received national media and social media attention from sources like the Wall Street Journal, the American Bar Association, Above the Law, truTV, MSN Now, the National Review Online, Quora, and Reddit.

Grades in law school are critically important.  They determine scholastic honors and they impact placement prospects and career paths.  Thus, it is essential that we award grades fairly.  My articles focus on identifying the protocols that law schools should implement to accomplish that end.

Josh’s research on grading theory resulted in him winning the Law School’s Faculty Excellence Award for Research in 2014.

Contract interpretation is one of the most important topics in commercial law.  But there is very little scientific evidence regarding which approach to construing agreements best serves the fundamental policies of contract law.  My empirical studies were intended to provide that type of evidence and to illustrate how the West Key Number System can be used to conduct empirical research on legal topics.

Josh’s most substantial service projects to date are (1) the reform of the law school’s grading policy in 2011, mentioned above, and (2) his numerous activities in defense of academic freedom and tenure throughout the University of Arkansas System.  The latter work resulted in Josh winning the law school’s Faculty Excellence Award for Public Service in 2021.  Josh is also a member of the board of directors of a public interest organization, has served on several bar association committees, and has made numerous public presentations.  He has been quoted in the local and national press nearly three hundred times as an expert on bankruptcy law, constitutional law, civil procedure, contracts, and other legal topics.  Josh is the faculty advisor for several student organizations here at the law school including the Student Bar Association.  He has also performed more than five hundred of hours of pro bono legal services.  Finally, Josh has worked on numerous bills and proposed constitutional amendments pending before the Arkansas state legislature.

Josh graduated magna cum laude from the New York University School of Law and was named to the Order of the Coif.  He also served as the Legal Theory Editor for the New York University Review of Law and Social Change while a student.  After graduation, he was a law clerk to the Honorable Suzanne B. Conlon, United States District Judge for the Northern District of Illinois.  Josh then served as a litigation associate at two Chicago law firms—Mayer Brown and Freeborn & Peters.  At those firms, he worked on a wide variety of cases, including products liability, bankruptcy, antitrust, and business tort disputes.  “I enjoyed the practice of law,” Josh explains.  “The work was intellectually challenging, exciting, and often a great deal of fun.  And achieving a positive result for one’s clients is extremely rewarding.  While academia is a better fit for me, I would have been quite happy spending the rest of my career engaged in the full-time practice of law.”