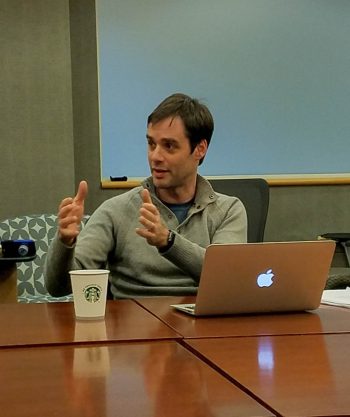 Professor Kahn-Fogel first joined Bowen as a visiting professor in 2008. From 2006-2008, he taught at the University of Zambia School of Law. He returned to Zambia from 2010-2011 as a Bowen Research Fellow, focusing on access to justice issues and on the interaction of colonial law and indigenous custom in Africa. At Bowen, Professor Kahn-Fogel teaches Comparative Law, Criminal Procedure-Pretrial, Sales, and Torts.

Professor Kahn-Fogel’s scholarship focuses on comparative law and criminal procedure. His recent articles have been published or are forthcoming in the Florida Law Review, the Houston Law Review, the Harvard Journal of Law and Public Policy, the Cornell Journal of Law and Public Policy, and the Kentucky Law Journal. Professor Kahn-Fogel’s work has been cited by practitioners and scholars, the leading treatise on American criminal procedure, the leading treatise on the Fourth Amendment, popular media, reports by leading international NGOs, a report by the British government’s Department for International Development, the Supreme Court of the Philippines, and the supreme courts of Iowa, Kentucky, New Mexico, Oregon, Utah, and Vermont. The National Association of Criminal Defense Lawyers has recognized his work on eyewitness identification as “must read” scholarship. He won the 2016 Bowen Dean’s Award for Excellence in Scholarship and the 2020 Faculty Excellence Award for Research or Creative Endeavors.

Professor Kahn-Fogel has served on the editorial board of the Zambia Law Journal, and he currently serves on the editorial board of the Case Commentary Unit of the Southern African Institute for Policy and Research. Professor Kahn-Fogel is also the chair of the board of the Center for Arkansas Legal Services. He is licensed to practice law in New York. In his spare time, Nick enjoys cooking unhealthy food, jogging slowly, and playing vigorous, mediocre tennis.

Nicholas A. Kahn-Fogel, An Examination of the Coherence of Fourth Amendment Jurisprudence, 26 Cornell Journal of Law & Public Policy 275 (2016)

Nicholas A. Kahn-Fogel, The Troubling Shortage of African Lawyers: Examination of a Continental Crisis Using Zambia as a Case Study, 33 University of Pennsylvania Journal of International Law 719 (2012)

Nicholas A. Kahn-Fogel, Hanging in the Balance: Health, Dogma, and the Debate over Malpractice Reform, 102 Journal of the National Medical Association 254 (2010)

Nicholas A. Kahn-Fogel, Beyond Manson and Lukolongo: A Critique of American and Zambian Eyewitness Law with Recommendations for Reform in the Developing World, 20 Florida Journal of International Law 279 (2008)