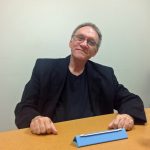 Dr. Robert Sanderson was born in Windsor, Vermont, on January 13, 1948. As the step-son of a Navy Petty Officer, Dr. Sanderson has traveled extensively along the eastern seaboard. Upon completion of high school at Trezevant High in Memphis, Tennessee, he worked as an engineering draftsman before entering Memphis State University where he earned his BA and MA in Sociology. Studying briefly at Oklahoma State University in 1980, he transferred to Louisiana State University and earned a Ph.D. in Sociology.

“Dr. Bob,” as he is known to his students, is married to the former Sonja McGough of Jonesboro, Arkansas, with whom he has one son, Ian Spencer Sanderson.  Dr. Sanderson is an associate director of the Sequoyah National Research Center, home of the American Native Press Archives and Dr. J. W. Wiggins Collection of Native American Art.  The Sequoyah National Research Center is currently involved in a funding campaign to build a world-class facility on the UALR campus.  Dr. Sanderson teaches numerous courses, primarily online, including several on Native American topics, Classical Social Theory, Deviance, Criminology, Gender Roles, and Sociology of Mental Health.