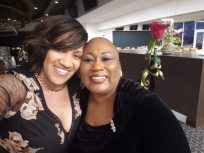 Political Science Professor Sherri Wallace has her favorite quote atop her CV: “She who learns, teaches.”

Last month, the YMCA of Greater Louisville recognized Wallace for her work teaching, along with Marian Vasser, UofL’s director of diversity education and inclusive excellence. The two women were honored as Black Achievers by the organization, along with 25 others in the community.

Wallace, who earned her master’s degree and PhD from Cornell University, joined the Department of Political Science at UofL in 2006. She is the first and only African American woman to earn tenure and promotion to full professor in her department.

Among her many achievements, Wallace has been selected as a faculty favorite, as the recipient of the Anna Julia Cooper Teacher of the Year Award from the National Conference of Black Political Scientists, and the recipient of the Grawemeyer Award for Outstanding Instructional Design.