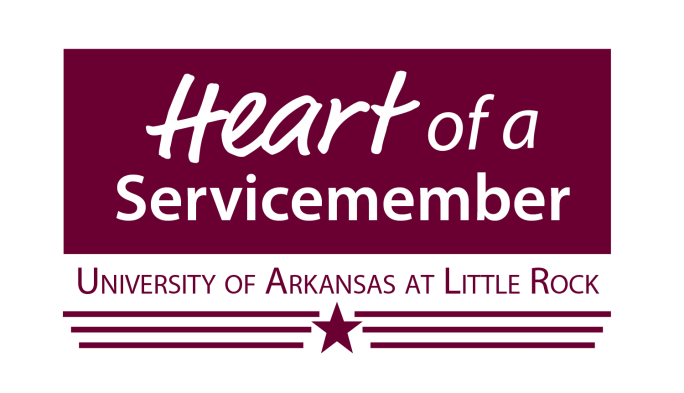 ATTENTION: Due to COVID-19, the Military Student Success Center will be closed until further notice. You can still reach us at military@ualr.edu or 501-682-8387. We can also discuss a virtual meeting if that meets your needs better than an email or phone call.

UA Little Rock’s Counseling Services is hosting an Out of the Darkness Virtual Walk in support of the American Foundation for Suicide Prevention. Please join our team, Students Affected by the Military, as we walk to raise awareness and funds for suicide prevention. As we know, veteran suicide rates are extremely high. 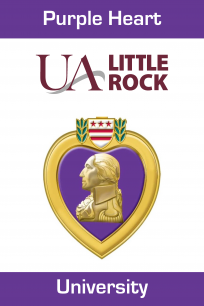 On December 16, 2016, UA Little Rock opened the Military Student Success Center. The Center was made possible through the generosity of a grant from the Student Veterans of America and Home Depot along with the support from campus leaders, Veterans, students, and Veterans Villages of America.

UA Little Rock has the honor of being a Purple Heart University.

Air Force students may take their general education classes through UA Little Rock to get their Community College of the Air Force degree and then continue on seamlessly to their bachelor’s degree with our AU-ABC partnership. 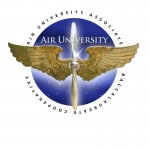 According to University of Arkansas Board of Trustees policy, For the purpose of tuition and fees applicable for all programs of study, including distance learning programs, effective July 1, 2015, all campuses of the University of Arkansas System shall classify a student as in-state or resident, if the student meets any of the following criteria regardless of his or her residence:

If you qualify for in-state tuition as it is listed on this policy, please fill out this form.

1 For the purpose of this policy, dependents are unmarried children who are legal dependents of the military person as defined by the IRS.

The UA Little Rock Office of Military Student Success is ready to assist you through the paperwork jungle in order to help you to receive the educational benefits you have earned. Drop by (Speech Building, Room 111), email (military@ualr.edu), or call (501) 682-8387 to set up an appointment today.

In 2008, our faculty voted unanimously to accept military credit as academic credit whenever possible.

The American Council on Education has performed evaluations on most military training courses and makes recommendation as academic equivalencies. Other military schools are regionally accredited such as all five service academies*, Air University, and the Community College of the Air Force.

*The Five service academies are as follows:

Any credit used towards your major requirements will be evaluated and brought into your UA Little Rock transcript by the major department.

We want your experience at UA Little Rock to be the best. We know that each military member has a unique set of educational goals and we want to help you meet those goals. Let us know how we can help you.