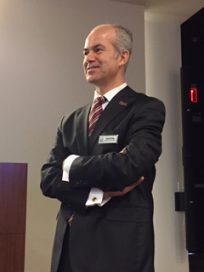 Special Security Agent Turner is a proud Arkansas native and graduate of the U of A at Fayetteville where he obtained a Bachelor of Science degree in Computer Science Information. He began his career with the FBI in 2005 and has worked on assignments ranging from investigation of cyber-crime matters with an emphasis on crimes against children, cyber terrorism and state sponsored intrusions, to digital evidence collection and computer forensics.

The event was well attended by students, faculty, and staff members who were treated to an interesting and informative session on many cybersecurity related subjects.  Turner illustrated many of the points with examples from his own experiences as an FBI agent. His remarks were timely and the audience responded enthusiastically by asking many questions and participating in discussions.

The IT Services sponsored event was open to the entire campus