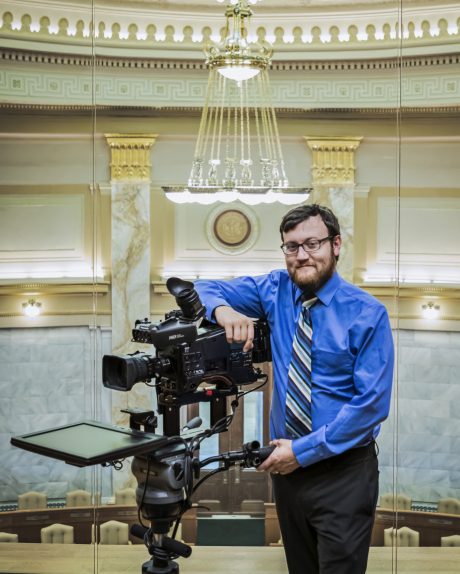 Will Tracy, who grew up in DeWitt, graduated from UA Little Rock in 2008 with a production emphasis and a film minor. After years of professional experience in live streaming and Internet production, he now works for the Arkansas House of Representatives, where he is charge of streaming and video operations.

In addition to that, Will also oversaw four interns from the School of Mass Communication during the recent Legislative session. “I love still keeping those connections to the school,” he said. “Overall, I think I’ve now had eight interns from the Mass Comm program over my 9- or 10-year career. And I like that.”

Will also owns a freelance video production company, Jabber Jaw Productions. He lives in Little Rock with his wife, Rachelle, and their two kids, Quinn and Walker. In his spare time, he is an avid home brewer.

What’s the most important thing you took away from your studies at UA Little Rock?
“Learn from your mistakes. Because you’re going to make a lot of them, and if you don’t learn from them it’s just pointless.”

Who was a faculty member who had a strong influence on you and your career path?
“Dr. Mark Giese, for sure, for production. And probably Ben Fry. He was the film professor at the time – who has sadly passed away – and he was a big factor on the film side and writing and just getting my film knowledge. But Giese was by far the biggest influence I had.”

What advice would you give to current students?
“Get as much real-world experience as possible. Take opportunities that professors give you. And don’t knock something before you try it. It might not sound like a project you want to work on, but it could probably give you more experience than what you might be interested in. Everyone wants to be a filmmaker, but go film that live event. It can give you skills that can actually get you paid in life.

“And something I always tell people: It takes time to get where you want to be, or get to a place where you can make a living at it. I came out with a good resume from UALR, and it still took four years to really get where I was making a living at it.”