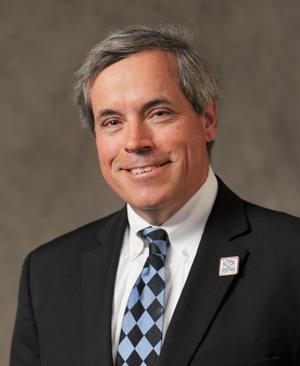 Mark Christ, originally from Fort Wayne, Indiana, graduated from UA Little Rock in 1982, after studying journalism and liberal arts. He is now the head of adult programming for the Central Arkansas Library System. In that position, he helps create original programs for the 14 CALS branches to help further the library’s mission.

Mark previously worked as a journalist at The Commercial Appeal in Memphis and the Arkansas Gazette in Little Rock before going to work at the Arkansas Historic Preservation Program for nearly 29 years. He retired from there in October and began his new career with the library system.

Mark’s wife, Kimberly, is still in the newspaper business, working as an editor at the Arkansas Democrat-Gazette. His daughter Emily is a UA Little Rock graduate, and his daughter Cassandra is a current student and Donaghey Scholar.

What’s the most important thing you took away from your studies at UA Little Rock?
“That attention to detail and checking and double-checking facts is essential, whether writing or editing a news story or conducting historical research.”

Who was a faculty member who made a strong impact on you and your career path?
“Luther ‘Sonny’ Sanders sent me back to interview the same guy three times on the same story until I got it right. This taught me the value of getting it right the first time, and I have never forgotten it.”

What is your favorite memory from your time at UA Little Rock?
“My favorite memories are of the late nights spent as editor of The Forum, working with great friends to get the newspaper out.”

What advice would you give to current students?
“Get your degree and follow the path that life leads you to – it might not be what you think!”