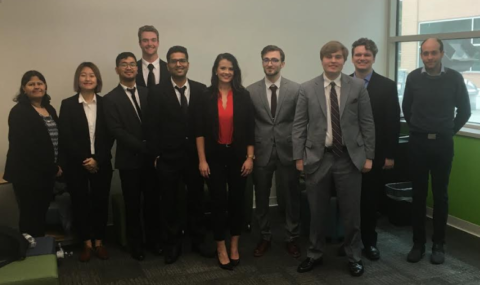 Three teams of entrepreneurial-minded students from the University of Arkansas at Little Rock are competing in the finals of the Arkansas Governor’s Cup business plan competition and a top prize of $25,000.

Winners will be announced Thursday, April 9, during a virtual awards program launching at noon.

Members of CloudCare, who are competing in the undergraduate division, include Claire Herman, Philip Plouch, and Justin Priest. Designed to bring parents peace of mind, CloudCare is a smart baby monitoring app that works alongside the parent by generating real-time push notifications based on a baby’s movements and breathing patterns.

The Face-to-Face team consists of Joseph Kready and Thomas Marcoux, who are competing in the graduate and innovation divisions. Face-To-Face is an innovative technology that creates Avatar-based chatbots that replace existing text-based chat bot solutions.

“With avatars, we can display emotion during the conversation at a level that’s never been done before,” Kready said.

“SYMPER, as a product, can notify and alert its user’s emergency contacts via a mobile application installed on the user’s phone and enable hospitals to maximize space by reducing the number of beds,” said Nongsiej.

Fifty students representing 18 teams from eight Arkansas universities made virtual presentations to nearly 30 judges during the final round of the 20th annual Arkansas Governor’s Cup competition.

Martial Trigeaud, a UA Little Rock adjunct professor in the College of Business who is mentoring the three UA Little Rock teams, said one of the biggest challenges for this year’s competition was the quick switch to virtual presentations due to the COVID-19 pandemic.

“I am very proud of all of our teams and think they have a great chance of winning the Arkansas Governor’s Cup,” Trigeaud said. “The main challenge with this year’s competition was to switch to an online presentation weeks before the presentation There is a big difference between giving an online and a face-to-face presentation. The students worked very hard to deliver a great presentation. On the plus side, we were able to record ourselves, watch our presentation beforehand, and get feedback.”

The distribution of the Governor’s Cup $154,000 cash prize pool includes $25,000 to the winners of the graduate and undergraduate divisions, $15,000 to the second place winners in both divisions, and $10,000 for both third place winners. Faculty advisors for all six winning teams each receive $2,000 in cash. For the Innovation Division, a winning team is chosen in both the graduate and undergraduate divisions. Each team will receive a $5,000 cash prize.

The competition does not require teams to launch their businesses; instead, they are rewarded for the rigorous and real-world experience they gain as competitors. They are also exposed to the state’s rich entrepreneurial history and discover the opportunities Arkansas has to offer to entrepreneurs who want to start businesses in the state.

“Thanks to videoconferencing technologies and the flexibility of everyone involved in this process, we’ve been able to pull off this competition in the midst of a world turned upside down,” said Rush Deacon, CEO of Arkansas Capital Corporation, which manages the Arkansas Governor’s Cup. “I encourage everyone to log in to the Arkansas Governor’s Cup website at the appointed hour, where you’ll find a link to the live awards presentation.”

While many business and entrepreneurial competitions around the country have been canceled, Trigeaud is grateful his students have the invaluable experience of participating in the Arkansas Governor’s Cup.

“Arkansas could have just canceled the competition, but they worked very hard to put the event on,” Trigeaud said. “We applied to other entrepreneurial pitch competitions, but they were just canceled. I think it’s great that the Arkansas Governor’s Cup was put online and was still able to provide the students a great business competition experience.”