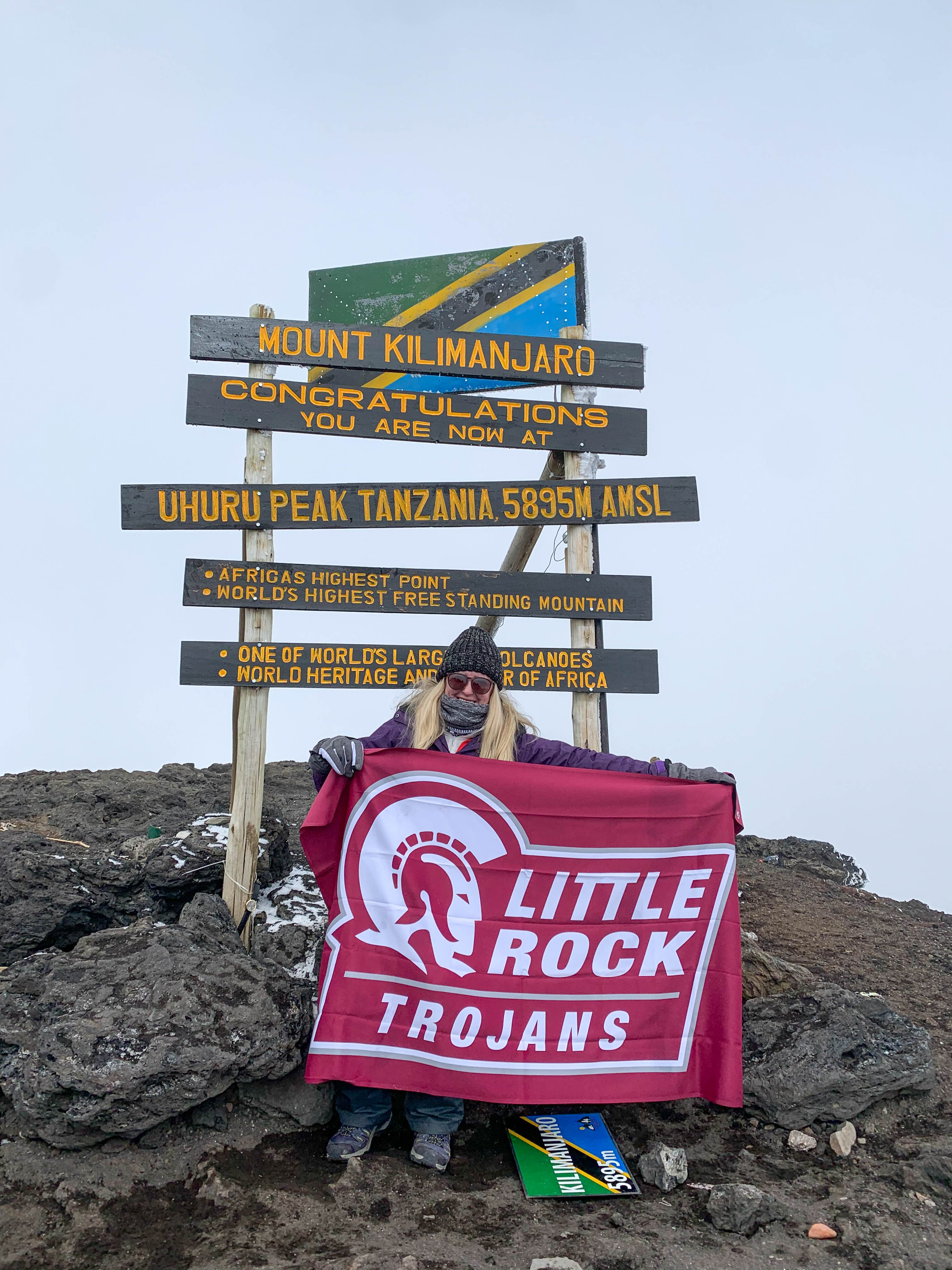 While most UA Little Rock employees and students took the winter break as a time to rest and rejuvenate, Jenna Wylie, head women’s golf coach, took the opportunity to complete her long-held goal of climbing the highest single freestanding mountain in the world.

At 19,341 feet above sea level, Mount Kilimanjaro, a dormant volcano in Tanzania, is the high mountain in Africa. Wylie, who’s had her heart set on climbing the mountain for more than a decade, reached the top on New Year’s Day.

“It really was amazing. I don’t know how to describe it,” Wylie said. “It tests you mentally more than it does physically. You have to walk really slowly to acclimatize to the altitude. You are excited, and you want to go faster, and the guides are telling you to walk as slow as possible as you hike for 7-8 hours a days. I love traveling, and this is one of the most epically big adventures of my life.”

Considering her previous mountain climbing experience involved hiking Pinnacle Mountain State Park with her husband Justin and their dogs, Wylie admitted the trip was a big step up for her.

“This was my first trip mountain climbing,” Wylie said. “I’m one of the people that jumps in with two feet. This is something I’ve always wanted to do. I’ve been saying this for more than 10 years that I want to climb it. When 2020 rolled around, before COVID, I said I was going to do something crazy this year. I booked it, counted down, and hoped for the best.”

Wylie prepared for the trip by ramping up her cardio training and running. She also worked with a personal trainer to strengthen her ankles, legs, and shoulders. Since much of the training took place while coaching the golf team, Wylie said her players became “used to my crazy adventures.”

“When I booked it back in January, I told the team I was going,” Wylie said. “They got used to me coming to practice sore from workouts or showing up in hiking boots. I am probably one of the crazier, adventurous, fun-loving coaches, and that is part of my personality. They do think it’s pretty cool. I have a player from Kenya and Mount Kilimanjaro borders Kenya, so she thought it was cool that I hiked Kilimanjaro.” 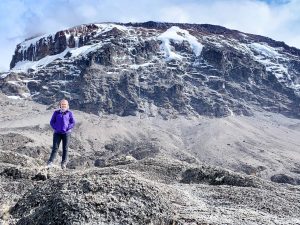 After spending Christmas with her family in England, Wylie arrived in Tanzania on Dec. 27. That night, she met her climbing companion, Jeremy Bergstom of Houston. While there were originally supposed to be more climbers, COVID-19 dwindled the group down to just two climbers and their guides.

“It isn’t truly possible without the guides and sherpas that take you up there,” Wylie said. “They deserve half if not more of the credit. They tested my oxygen levels everyday and sang Ed Sheeran to keep us entertained.”

When she reached the top of Mount Kilimanjaro, where climbers are advised to spend no more than 20 minutes, Wylie represented the UA Little Rock community by breaking out her Little Rock Trojans flag.

“People usually take little signs or flags, but they were surprised when I pulled out this huge UA Little Rock flag,” Wylie said. “It definitely wasn’t on the smaller scale. Little Rock is my home now, and I thought it would be cool to have a representation of me being at the top of the mountain. I will have something to remember where I was at that point in my life. When I am 65 or 70 and I’m looking at pictures of my life, I will always remember I worked at UA Little Rock.”

After finishing her climb and descent of Mount Kilimanjaro, Wylie went on a six-day African safari before returning to the U.S. on Jan. 9. Her adventures are far from over as Wylie is already planning another trip to Tanzania.

“I’m actually hoping to go back to Tanzania in November,” Wylie said. “I want to do some volunteer work with an orphanage, a school, and an animal rescue organization. That will be the next adventure. Also on the bucket list, I want to walk the Great Wall of China and Snorkel the Great Barrier Reef.”

When asked if she would consider leading a group from UA Little Rock to summit Mount Kilimanjaro, Wylie said it’s a possibility.

“I haven’t tried to get anyone from UA Little Rock to go there, but I would be all for a group going if anyone did want to go,” Wylie said. “I know when I was up on the mountain there was a workplace group. I’m definitely all for going back again.”