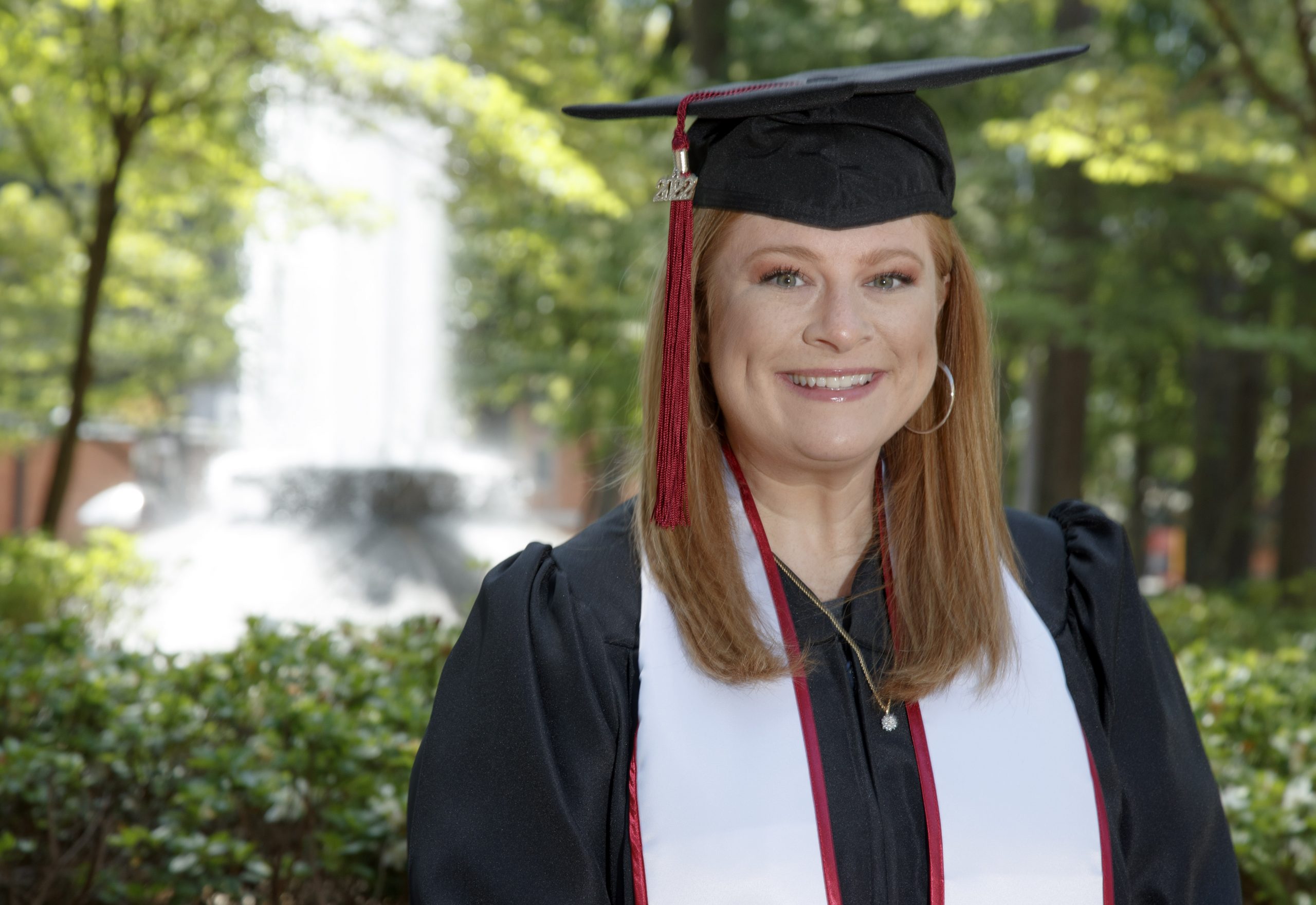 One University of Arkansas at Little Rock graduate has fulfilled her dream of completing her college education and her longtime goal of becoming a teacher.

Christen Alsup, 36, of Benton, will graduate May 14 from UA Little Rock with a bachelor’s degree in elementary education 19 years after she first started college.

“Besides giving birth to my kids, this is going to be one of the proudest moments of my life,” Alsup said.

A career as an educator and going to college are two things that weren’t always on Alsup’s radar. Upon graduating from Benton High School in 2003, Alsup began taking classes at UA-Pulaski Technical College for a year until she decided her heart wasn’t in college at the time. She chose to enter the workforce instead. Alsup eventually got married, and her life moved fairly quickly from working at a marketing and advertising firm to becoming a military wife and stay-at-home mom.

“Had I stuck with college right when I graduated high school, I probably would have become a horrible teacher,” Alsup said. “It wasn’t until I became a mom that I loved and appreciated children so much. Timing is everything. This is my time now, and I want it, and I am confident now.”

When Alsup’s son, Hayden, turned five and started kindergarten, she wanted to give college another try.

“I reapplied at Pulaski Tech, and I chose to pursue a certificate in medical coding,” she said. “While I was in school, my youngest child started kindergarten. I still wanted to be with him every day, so I became a substitute teacher. That is where I found my passion for teaching. I quickly changed my certificate to a degree in elementary education.”

Alsup graduated from Pulaski Tech and started at UA Little in 2020 in the middle of the pandemic.

“I’ve loved my time at UA Little Rock, and it has been eye opening,” Alsup said. “A lot of the first semesters were all online. When we finally got to go to campus, I had never been on a university campus before. I felt accomplished just being here. Some people thought I was crazy for going back to school for a teaching degree. I was determined to prove it’s never too late. I didn’t just want to pass, I wanted to excel!”

Alsup did indeed excel at her classes, earning a 4.0 GPA at UA Little Rock. She recalls her favorite moment of UA Little Rock as April 15, the Arkansas Department of Education’s annual Educator Commitment Signing Day. Alsup and her classmates traveled to the Arkansas State Capitol Building to meet with Gov. Asa Hutchinson and other teachers across the state.

“It was so exciting to be with my classmates and to sign my certificate of commitment to teach in Arkansas,” Alsup said. “We got to meet the governor and other graduates to share our experiences. I also had my picture taken with Dr. Leslie Sharp, who inspires me very much. I’ve really connected with her, so I’ve asked her to hand me my diploma at graduation.”

Among the people who will cheer her on at her graduation, Alsup said she is proud to share this moment with her mother, who served as an inspiration for going back to college later in life.

“My family has been a huge support system. After having a baby my first semester in, it was their encouragement and help that kept me going. There were times I wanted to give up, but they always told me NO! I am so thankful for them watching the kids, cooking supper, cleaning my house, or whatever I needed while I studied.” she said.

“My mom is the only other person who’s graduated college before in my family,” she said. “My mom had me at 15, and the earliest memory I have is of her high school graduation. She did not go to college right after high school. She too became a military wife and joined the workforce. She was in her late 30s when she decided to go back to college to become a nurse. She didn’t want to be a statistic. She wanted something better for her girls and to be a role model. “Between my grandparents, who helped raise me while my parents finished high school, my mom, and dad, who is a veteran and now a police sergeant, I have a strong passion to serve and help others, especially children. I am so proud to be their daughter.”

After graduation, Alsup is hoping to teach in the Benton or Bryant school districts, where she completed her student teaching. She is reminded of a piece of advice she received from Tammy Reitenger, who was the former principal at her son’s school, Hurricane Creek Elementary School, in Bryant.

“She said that I would be a fantastic teacher,” Alsup said. “She told me, ‘The way you love these kids is something that can’t be taught.’ It was that piece of advice that helped me decide to become an education major. The educators in the Benton and Bryant school districts have been so encouraging along the way that it’s more confirmation that I am doing what I’m meant to do.”