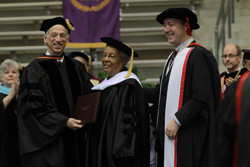 Gertrude Jackson received an honorary Doctor of Humane Letters at UALR’s fall commencement ceremonies for her many contributions to civil rights Thursday, Dec. 20, in front of an Arkansas crowd.

Chancellor Joel E. Anderson surprised Jackson and the crowd during the ceremony by reading a letter from former President Bill Clinton and Secretary of State Hillary Clinton, applauding her for the work she has done to help improve her community.

“Gertrude and her husband Earlis earned the trust of their community and commanded the respect of their adversaries through their sheer determination for equal treatment under the law even when that determination put their lives and livelihood at risk,” Clinton wrote in the letter.

For over 60 years, Jackson was an integral piece of the civil rights movement in and around Marvell in Phillips County. In the mid-1960s, Jackson and her husband, a farmer in a community beyond Turner and south of Marvell in Phillips County, invited the area Student Nonviolent Coordinating Committee (SNCC) field secretary to hold weekly meetings in the community’s church to give people an outlet to air grievances.

“Her example, the model she was in turn inspired and gave confidence to others, to hope, and to act, and to overcome the deadening regime of poverty and discrimination,” Anderson said to the audience of new graduates and their supporters.

Jackson was also instrumental in leading a group that established the Boys, Girls, Adults Community Development Center that continues today in Marvell.

“The award of an honorary degree recognizes the contributions of Jackson and other women like her whose efforts are significant yet all too often sidelined because they remain out of the headlines and out of sight.” 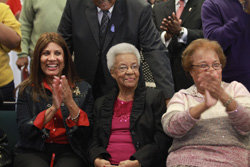 At a reception following the commencement ceremonies, Jackson’s friends and colleagues described her attributes by talking about the work she has done to improve the lives of others in and around her community.

Their stories describe a woman of great strength and determination. Most importantly, no matter what living in a Delta town in the 1950s and 60s meant as far as social standing, Jackson would not allow others to determine her fate.

Dr. John Kirk, Donaghey Professor and Chair of the History Department nominated Jackson for the honor. He met Jackson while conducting research on his book, “Arsnick: The Student Nonviolent Coordinating Committee in Arkansas.”

“Local people like the Jacksons were crucial in forming an all-important bridge between external groups like SNCC and local Arkansas communities,” he said.

Learn more about Jackson and her community work at Why We Honor Gertrude Jackson.